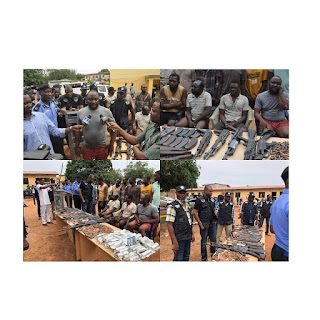 The Nigerian police said they have smashed two gun running and arms dealing ring and a gang of robbers and kidnappers in the Benue-Taraba axis, making 11 arrests.


Among the suspects arrested was one Miracle Emmanuel, a 27 year-old gun dealer from Anambra, based in Takum, Taraba state. With his three-man gang, the police found five Ak-47 rifles, along with other ammunitions.

Police said they recovered in total 10 AK 47 rifles and two Beretta pistols from the 11 suspects and claimed the arrests were a major breakthrough in stopping the incessant killing of innocent people in the Middle Belt states of Benue, Taraba and Nasarawa.

In Benue state, Morris Ashwe, 36, was the sole armourer arrested. He was accused of supplying arms to the wanted criminal kingpin, Terwase Akwaza a.k.a Ghana.

Also arrested was Husseini Safiyanu, also from Taraba. Police said they found five AK47 Rifles with the Taraba gang, along with 13 AK 47 magazines and 83 bullets.
The Police spokesman also said a seven-man robbery and kidnapping gang was arrested in Benue, along with two Beretta pistols.