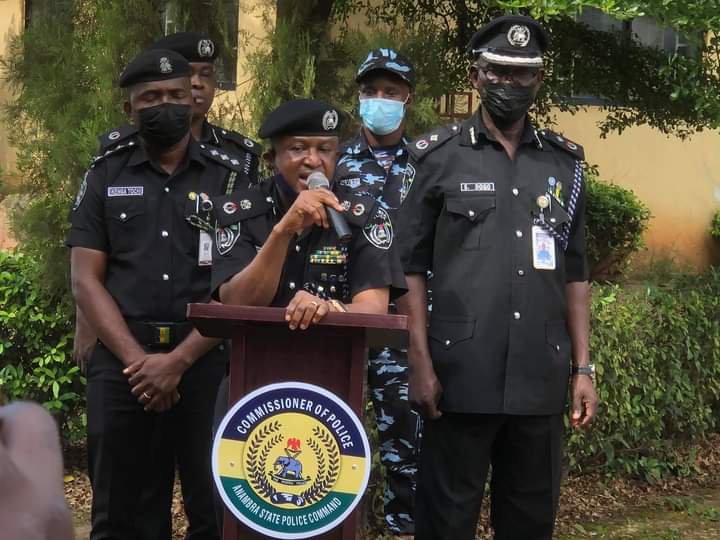 Following the attack at Police Headquarters and the office of the Independent Nigeria Electoral Commission on Sunday by hoodlums, the Commissioner of Police Anambra State, Chris Owolabi has addressed the member of the press.

Read his full statement below;

Good morning gentlemen of the PRESS.

On 23/5/2021 at about 8:20pm, hoodlums operating in three Hilux vehicles carried out coordinated and simultaneous attacks at both B’ Division headquarters and State INEC office Awka.

The hoodlums had attacked the Police Division as a decoy, then proceeded to nearby INEC office where they attempted to set ablaze the main headquarters building. They were successfully repelled by the police and other security agencies who quickly mobilized to the scene forcing them to scamper for safety with many sustaining gunshot wounds as revealed by blood trails in the surrounding bushes. Seven (7) INEC vehicles and part of the store building were torched from an improvised explosive device (IED) thrown into the premises which was promptly extinguished by firefighters. At B’ Division police station, an explosive ordinance lobbed into the station partially torched the charge room but was quickly put off as the assailants were also repelled without recording any police casualty.

Meanwhile, efforts are ongoing to arrest fleeing suspects. Members of the public are assured of their safety and encouraged to report any person seen with bullet wounds through police emergency number 07039194332 or to the nearest Police Station for prompt action.