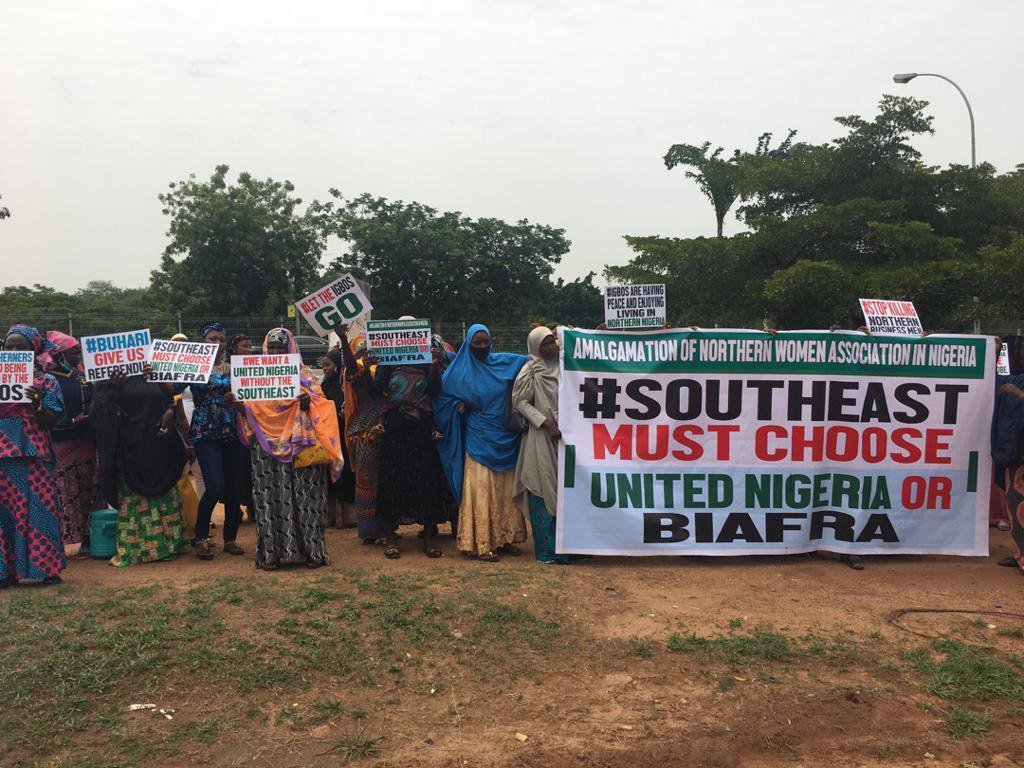 A group known as the Amalgamation of Northern Women Association has taken to the street in a peaceful protest to demand the Biafra referendum.

This follows the insecurity that has been witnessed in the South East which has been stated that the members of the Indigenous Peoples of Biafra, IPOB and its Eastern Security Network were involved in the destruction of public properties and high rate of killing.

Speaking on Saturday, the coordinator of the group, Hadiza Adamu, stated during the protest in Abuja that citizens should be allowed to choose to stay in Nigeria or leave.

She said, “Nigerian History has shown that women carry the heavy burden of war and acts of insurrections and terrorism. We have gone through it from 1967 to 1971, our men died and left us with the children to cater for out of nothing, other men that survived simply moved on but we never moved on.

“The aftermath of the war and the sufferings left lifetime scars in our hearts and on our bodies. It is for this reason that we (have) come together today and say we don’t want another war, another insurrection.

“We, therefore, unanimously call on President Muhammadu Buhari as the leader and father of the country; and the leadership of the National Assembly, President of the Senate, Dr. Ahmad Lawal; and the Speaker of the House of Representatives, Hon. Femi Gbajabiamila; to immediately call for a referendum in the country.

“Let people choose to live in peace in Nigeria or leave, any other group or nationality that wants to secede to exercise their rights of self-determination like the South-East has been agitated for decades to be allowed to leave Nigeria peacefully, without resorting to a second civil war.

“Today the Igbo nation has turned the entire South-East to almost a war zone, northerners irrespective of their tribes are no longer safe, states’ infrastructures are no longer safe, service personnel from police to army are not safe, INEC offices and other symbols of democracy in the country are being destroyed on daily basis, our husbands that go to do business in South-East no longer return home safe, our political leaders who travel to the South-East on national assignments are assassinated in broad daylight.”