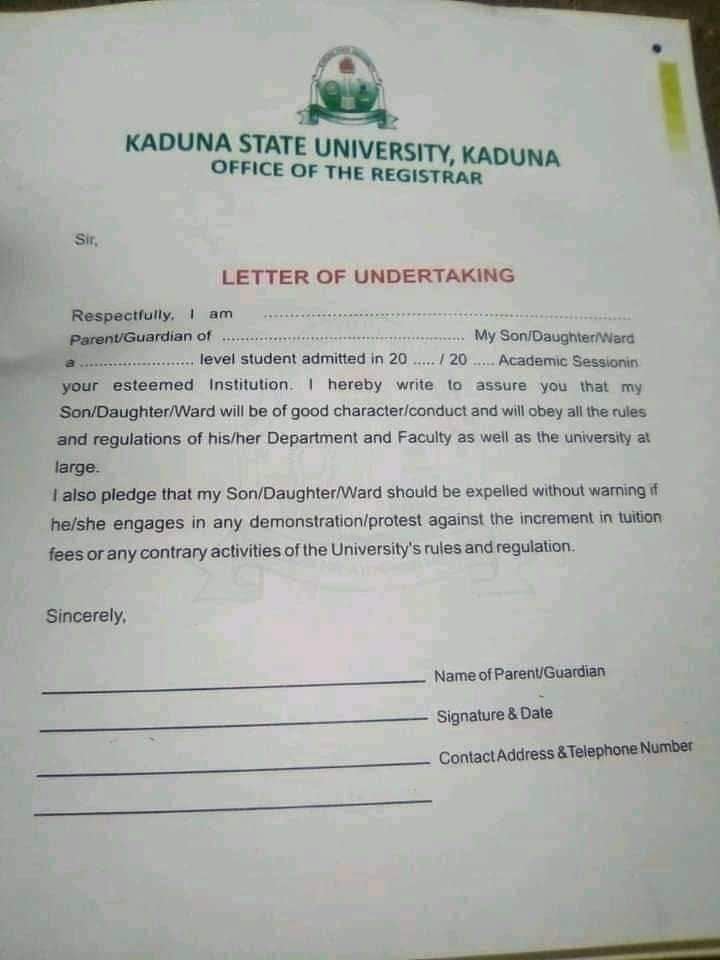 The Governor of Kaduna State, Mallam Nasir El-Rufai has banned Kaduna State University (KASU) students from protesting against the increment of the institution’s school fees.

This was made known in an undertaking giving to parents of fresh and returning students of the 2020/2021 academic session who were told to sign the undertaking.

The statement signed by the University Registrar, Samuel Manshop, asked parents to pledge that their wards will be expelled if they protest over the increment of school fees.

Recall that on Tuesday, Governor El-Rufai, through the Deputy Governor Hadiza Balarabe to students at Sir Kashim Ibrahim House on 3rd June insisted that the State government will not reverse the 500 per cent increase in tuition fees.

Indigenes studying any course in the social sciences will pay N170,000 and non-indigenes N200,000. Meanwhile, indigenes admitted to study medicine will pay N300,000 and about N500,000 for non-indigenes.

The government ignored KASU’s Academic Staff Union of Universities, asking it to rescind the tuition increase, arguing that the hike may result in 70 per cent of the students dropping out.

According to ASUU chairman Peter Adamu, “raising school fees by over 500 per cent will, without doubt, send thousands of the students out of school.”

Mr Adamu added that 70 per cent of the indigenous students were sons and daughters of peasant farmers, civil servants and petty traders.

“Worse still, the state government has sacked a good number of its workforce. Among them are parents and guardians of our students.

“These people struggle every day against the current economic downturn to pay the fees of their children,” he said.