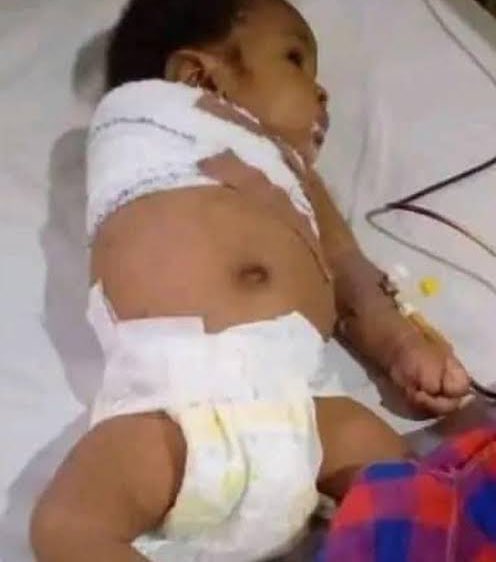 Wife of the Imo State Governor, Chioma Uzodinma has debunked the report that the baby whose hand was amputated was dead stating that Baby Miracle was recuperating well.

Speaking on Wednesday, Mrs Uzodinma disclosed that the Commissioner for Women Affairs and Vulnerable Groups, Hon. Lady Nkechinyere Ugwu confirmed the report when she visited the Federal Medical Centre Owerri on Monday.

He urged the public to respect the family by refraining from spreading rumours but supporting and praying for them in this trying period.

“The untrue report making rounds on social media about the demise of baby Miracle, whose father caused his hand to be severed by repeatedly hitting him with a hanger, has been debunked.

Baby Miracle and his family have already been through a lot, be respectful and refrain from spreading inaccurate rumours, instead support and continue to pray for them through this period.

My gratitude goes to the staff and management of FMC Owerri for their efforts in Miracle’s recovery. We will continue to care, support, and pray for him.

On the 25th of October, two months old baby Miracle was allegedly beaten by his 31-year-old father, Mr. Confidence Amatobi, a native of Amurie in Isu LGA of Imo State with a hanger for disturbing his sleep.

The incident led to the amputation of the fractured arm at the Pediatrics ward of the Federal Medical Centre, FMC Owerri.

NAWOJ, NHRC and the aggrieved mother of baby Miracle, made the call for justice in Owerri the Imo State Capital.

It was gathered that the father, who’s still at large, proceeded to lock the baby and his mother so they do not alert the neighbours of the unfortunate incident.