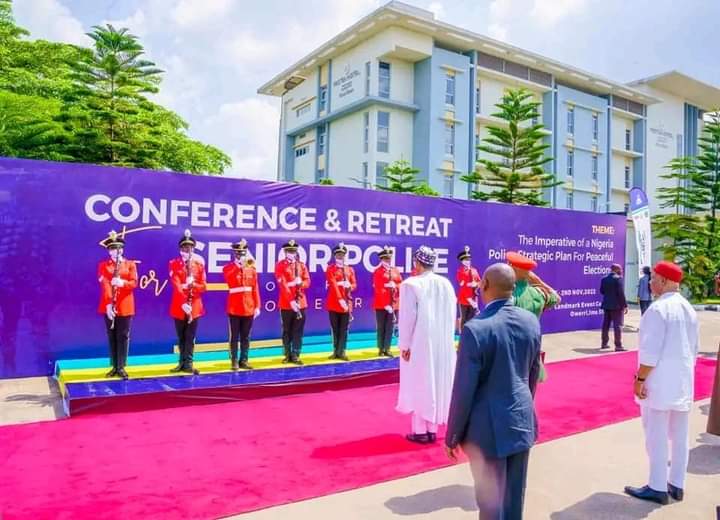 President Muhammadu Buhari has urged the Inspector General of Police, (IGP), Usman Alkali Baba to sustain his quality leadership standard and ensure that the force contributes its quota towards free, fair and credible elections in the next year’s general elections.

Buhari gave this encouragement in his address during the flag off of a 3-day retreat for senior officers of the Nigerian Police, at the Landmark event center, Owerri, on Monday, with the theme: The Imperative of a Nigerian Police Strategic plan for a peaceful election.

He urged the force to maximize the opportunity of the conference to achieve two critical goals; To view the current internal security threat as it may affect the general elections, to perfect operational plans that will guarantee a credible outcome of the elections.

He commended the Inspector General of Police for providing; Focused, courageous and visionary leadership for the Nigerian Police and for striving assiduously to stabilize the internal security of the country.

Also the president commended the Imo State Governor for his exemplary support to the federal government on the issues of national security, as exemplified by the hosting of the conference.

In his address, the Imo State Governor, Senator Hope Uzodimma expressed optimism that hosting the event will help to reassure citizens and residents of the state that Imo was safe again for businesses and tourism.

He promised not to relent in his determination to leave a legacy of a safe, peaceful and prosperous Imo State.

Speaking on the importance of the conference, the governor said, “This conference is crucial since it is aimed at evolving strategies towards discharging the duties of the police, ahead of the 2023 general elections.

“It is therefore gratifying to know that history will remember that it was in the beautiful city of Owerri, during my tenure that the police met and planned how to give Nigeria one of the most peaceful elections in its history”.

Earlier in his address, the Inspector General of Police (IGP), Usman Alkali Baba appreciated the Imo State Governor for his massive and unrelenting support to the Nigerian Police and other security agencies in the state, positing that the task of enhancing internal security is best achieved when state governors and other strategic stakeholders can compliment the federal government, as exemplified by the Imo State Government.

He commended President Muhammadu Buhari for his unprecedented support of the force which has enabled it to upscale its logistics and other operational requirements.