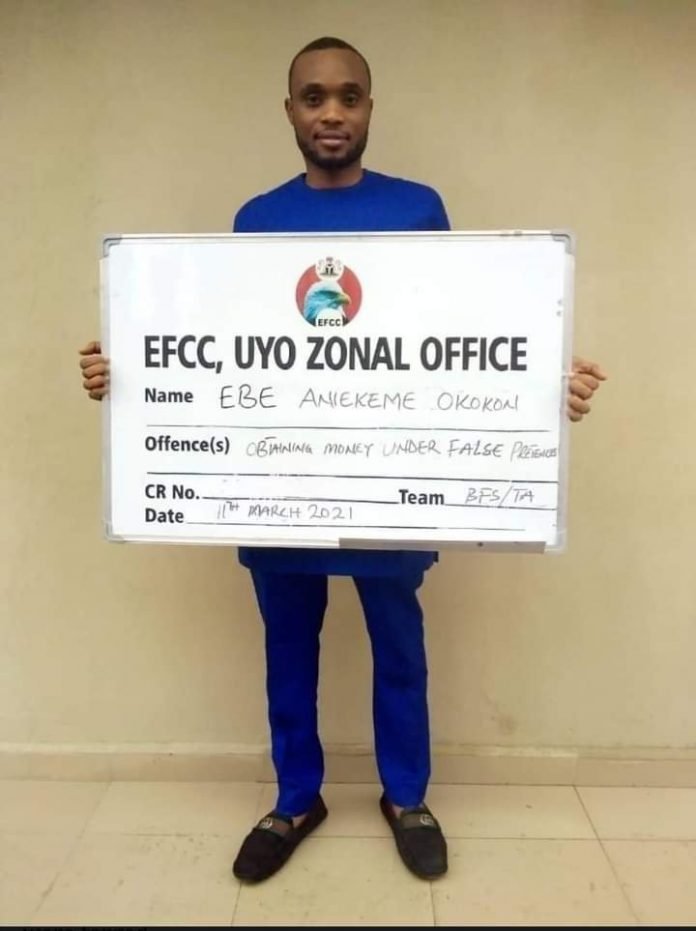 The Uyo Zonal Office of the Economic and Financial Crimes Commission EFCC, on Thursday, March 11, 2021, secured the conviction and sentencing of one Ebe Aniekeme Okokon, before Justice Archibong Archibong of the State High Court sitting in Uyo, Akwa Ibom State.

Okokon, an ex-banker who was sacked by an old generation bank where he worked, allegedly tricked one Effiong A. Asuquo into paying him N970, 000. 00 (Nine Hundred and Seventy Thousand Naira) for a fake “Life Insurance Scheme”, a policy which he promised would earn the policyholder interest at maturity in one year.

After investing in the scheme in 2018, the convict issued a forged copy of the scheme’s form to the complainant and on June 13, 2019, when she expected to receive a credit alert of her accrued interest, nothing came as she was left high and dry.

Exasperated, she rushed to the branch of the bank where the convict claimed he works, only to be told that he had been sacked and that the form of the Scheme used by the convict was forged.

Okokon was arrested on January 31, 2020, and admitted to the crime.

He was subsequently arraigned on a three-count charge bordering on stealing and forgery, to which he pleaded “guilty”.

Given his plea, Segun Akinrinlade, counsel to the EFCC reviewed the facts of the case and tendered various documents which the Court admitted in evidence and marked exhibits ‘A’ to ‘I’.

Other documents are the convict’s statement dated January 31, 2020, as well as the response letter from First Bank Insurance dated July 14, 2020.

“Since the offence of stealing and forgery are both morally and legally reprehensible, I believe that a punishment for you here, will serve as a deterrent to others who may wish to be or behave like you”, the Judge said.

He was sentenced to 6 months imprisonment on each count to run concurrently, from the date of arrest. He was however given the option of a fine of N200, 000. 00 on each count.

2023: Ikpeazu Reveals Why He’ll Remain Neutral Over Who Succeeds Him