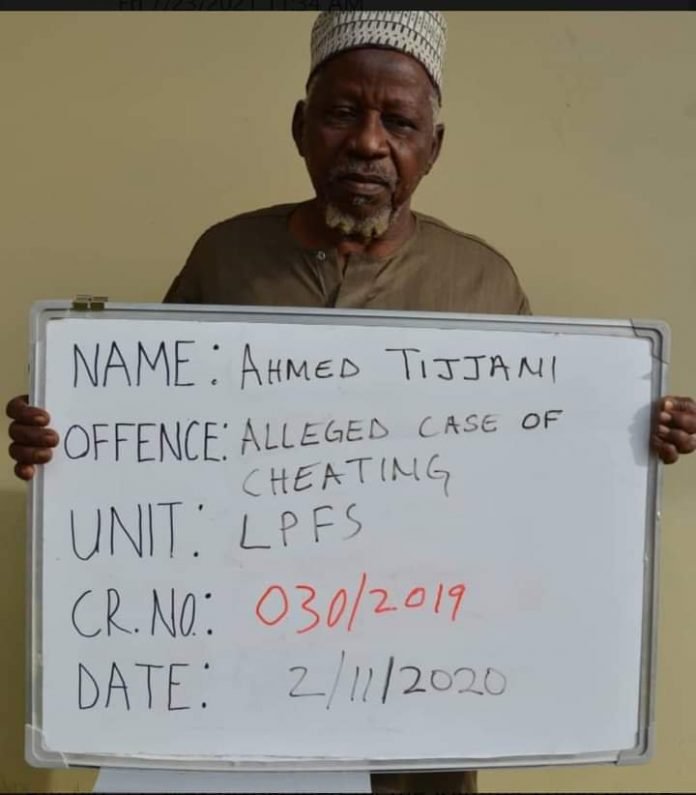 Ahmad, 77, was prosecuted by the Kaduna Zonal Office of the Economic and Financial Crimes Commission, EFCC, following a petition from one Buhari Ja’afar Suleiman, alleging that the convict defrauded him of Five Million Naira (N5,000,000.00.) over a piece of land.

The charge reads: “that you, AHMAD TIJJANI: “Male” sometime in October 2016 in Kaduna within the Jurisdiction of this Honorable Court, intentionally induced and deceived Buhari Ja’afar Suleiman to pay the sum of Five Million Naira (N5000,000.00) only for the sale of a purported plot of land situated at No. 039 Fauwa Road, Sabo Gari, Unguwar Dosa, Kaduna measuring 100 by 50ft, which you claimed to be the owner of the said land (title holder), a claim you knew to be false and cause him a loss of the property and thereby committed cheating, an offence contrary to Section 320 (b) of the Penal Code Law of Kaduna state, 1991 and Punishable under Section 322 of the same Law”

He pleaded guilty to the offence.

When the matter was called on Thursday, the prosecution counsel, Y.T Matiyak drew the attention of the court to a plea bargain agreement between the parties which was confirmed by the defence counsel, M.B Usman.

In view of his plea, Matiyak, prayed the Court to convict him accordingly.