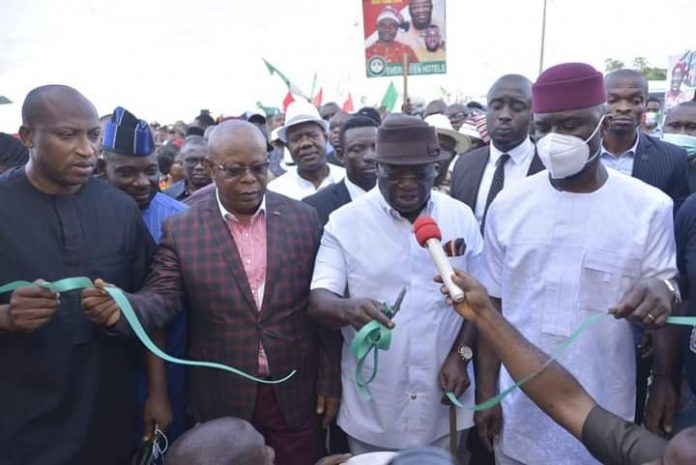 Abia State Governor, Dr. Okezie Ikpeazu has commissioned the newly constructed Nkporo Cottage Hospital in Ohafia Local Government Area of the State to provide adequate secondary healthcare for the people at the grassroots.

Commissioning the Cottage hospital as part of the Governor’s ‘Kinetic Abia’ Project Inspection and Commissioning, Governor Ikpeazu said the facility is fully equipped with mother & care facilities, radiant warmers, ultra sound machines, incubators, a modern theatre that can undertake orthopedic surgeries, laboratory facilities and 24 hours solar power. He said the management structure of the hospital is such that the medical personnel are indigenes of the Community who must reside within the community.

Governor Ikpeazu, who urged indigenes of Nkporo and Ohafia LGA to leverage on the establishment of the hospital to provide medical services to their people,said that they should support the hospital with their expertise. He announced that the hospital would have a Management Board comprising members of the Nkporo Development Union, the Youths and the Women of Nkporo to enable have a sense of ownership of the hospital.

The Governor disclosed that the State Government will support the hospital with a monthly subvention, and promised to commence the building of staff quarters and donate ambulance for the facility as well as absorb the staff into the State Hospital Management Board (HMB) and retain them in the hospital.

Also speaking, the Deputy Governor, Rt Hon. Ude Oko Chukwu, who is an indigene of the benefiting community said the Governor has changed the narrative in healthcare in Nkporo. He said his people are full of joy for the giant strides of the Governor in his community. He saluted the Governor for ensuring that the medical facilities in the hospital are comparable to what is obtainable in modern hospitals and assured that they will own the hospital and protect it.

Contributing, the Member representing Arochukwu/Ohafia Federal Constituency, Honorable Uko Nkole and Member, representing Ohafia North at the State House of Assembly, Hon. Mandela Obasi lauded the Governor for his efforts in remembering those in the rural areas by building the facility. They said the people are excited over the provision of the hospital that would serve the healthcare needs of the people.
Hon. Uko Nkole specifically thanked the Governor for the ongoing construction of a similar medical facility at Abam, Arochukwu LGA.

Speaking, the Commissioner for Health, Dr. Joe Osuji informed that the hospital has all that is needed for a hospital to function effectively including all the departments and trained personnel to manage it. He said the hospital would give the people affordable and accessible healthcare and charged the community authorities to take the facility as their own and secure it.

Dr. Osuji said the Governor is providing an ultra modern pediatric hospital, Mother & Child Healthcare Centre and is renovating Schools of Nursing in the State, including the recent award of contract for the construction of 100 bed building project in the School of Midwifery, Amachara, Umuahia. He added the efforts of the Governor in the healthcare is a sign that health center delivery in the State will get a boost

In their speeches, the Executive Chairman of Ohafia LGA, Dr. Okoroafor Ukiwe and the President, Nkporo Development Union, Chief Benjamin Imeri thanked the Governor for many things done for the Nkporo community including changing their stories of bad road networks for good. They appreciated the Governor for commissioning their road and training youths of the area in different skills to contribute to the development of the State and the provision of the hospital. They assured that the people would protect the facility.

All the Chairmen of the Local Government Areas in Abia North also spoke at the event and hailed the Governor for his people oriented activities.

Also, the Chairman, Nigeria Medical Association, Abia State, Dr Chimezie Okwuonu affirmed that the hospital would help in reducing infant mortality and will provide health care for the people at the grassroots saying that the people would no longer travel to far places for medical services.

Highlights of the occasion was the conferment of the Chieftaincy Title of AHAINYI on the Governor by the Abia North Council of the Traditional Rulers led by its Chairnan, Eze Uwakwe Ukaegbu.

The event attracted an array of dignitaries from across the State, including the Secretary to Government, Barrister Chris Ezem, State Chairman of the PDP, Rt Hon Asiforo Okere, present and serving members of the National and State Assemblies and a host of political leaders especially from Abia North.