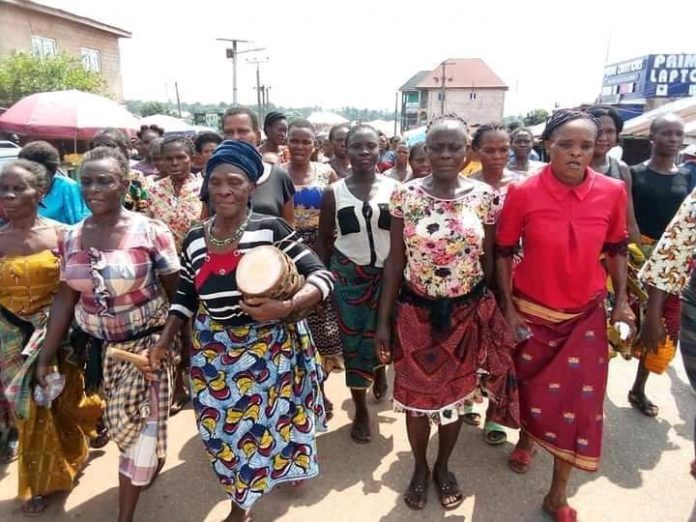 The women of the Ohafia community in Abia State took to the street on Wednesday in protest over the militarization of the region by the Nigerian Army.

According to the women who sounded gongs as they marched revealed that their children are scared to go to schools as the soldiers rape women and commit other crimes in the community.

A reporter who filmed the event in a viral video noted that, “the militarization of Igboland is not the best solution to problems in Nigeria,” as the women marched out in their numbers.

The reporter stated, “Ohafia women protesting that the army has occupied their territory for a long time preventing their children from going to school, raping and creating anti-social problems in the community.

“The atrocities in Ohafia caused by the occupation of the army is becoming unbearable. Hundreds of women protested, insisting that the soldiers must leave their community and their children must go back to school.

“For over a month, their children could not go to school because of the army occupation that has taken over their community.”

He noted that no other region in the country was taken over by military personnel as it is in the South-East.

“In fact, militarisation of Igbo community is an obvious case of intimidation by the federal government. You don’t observe this in other parts of the country. Why must it be Igbo land, in particular Ohafia?

“Why should soldiers occupy the entire community for nothing? Is that the best way to keep the peace? The royal fathers have been appealing to get these soldiers out of the community and their children must go back to school,” he added.