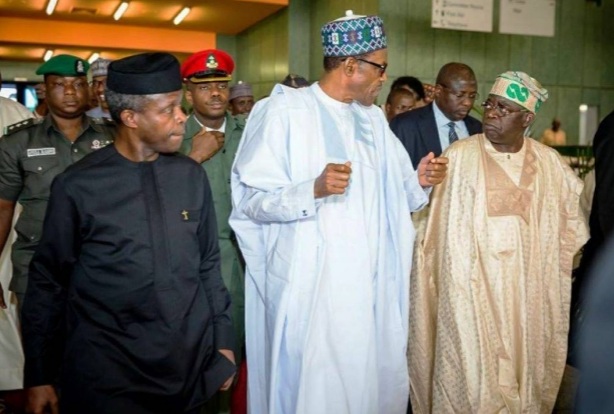 Muhammadu Buhari, Yemi Osinbajo, and Bola Tinubu represent a triumvirate. They reinforce, reflect, and inflect each other.
While Osinbajo is clearly a talented, well-spoken man, he is entirely a Tinubu political creation.

It was Tinubu who appointed him as a commissioner in Lagos State. It was also Tinubu who facilitated his emergence as Vice President. Politically speaking, without Tinubu, there would be no Osinbajo.

Although Osinbajo is undeniably brilliant (and don’t forget that IBB is brilliant, too!), there are way more brilliant lawyers in Lagos than Osinbajo that Tinubu could have elevated to political visibility, but he chose Osinbajo.

In other words, Osinbajo is an extension of Tinubu. They’re ideologically indistinguishable. They feed off each other’s values. To prefer one to the other is to prefer six to half a dozen, which is another way of making a distinction without a difference.

Both Tinubu and Osinbajo have been important props to Buhari’s ongoing disastrous regime of ungovernance. Without them, Buhari won’t be president.
They also helped plant, grow, and fertilize Buhari’s autocracy and monstrous incompetence every damn step of the way.

In other words, Buhari, Osinbajo, and Tinubu are tarred with the same brush. People who are picking favorites among these monsters of deceit and fraud are not only clueless, they are also enablers of Nigeria’s progressive descent to the nadir of hopelessness.
Our options are not limited to Tinubu, Osinbajo, or even Atiku Abubakar and all these other old stagers who have been endlessly circulating themselves in the political arena and who’re responsible for the perilous state of the country.

To ask who among these monsters we must choose is to impose unnatural limits on the choices Nigerians have.
Tinubu, Osinbajo, Atiku, and all these other old warhorses of corruption and ineptitude in APC and PDP wanting to be president are some of the worst people to ever get close to power in a nation that is blessed with scores of bright, far-sighted people, but many people are limiting our choices to the worst of us.

When people say Nigerians are their own worst enemies and are complicit in their own oppression, this is what they mean. Nigerians love to create false dilemmas for themselves and claim that they’re compelled to choose the lesser of two evils.

When you’re being roasted in a frying pan, you don’t jump into the fire to seek reprieve. Fire isn’t the only alternative to the frying pan.

The choice mustn’t be between Tinubu and Osinbajo (who’re actually one and the same thing) or between APC and PDP.
If we really want national salvation, we must be prepared to do the hard work of looking beyond the villains who have got us to where we are today.