Trump Reacts to Twitter Ban, Says It’s an Attack to Silence Him

The President of the United States of America, Donald Trump, has reacted to the ban of his Twitter account saying that it was a coordinated attack from Democrats and Radical left.

President Trump revealed that the purpose was to silence as Twitter is not about free speech but rather about promoting all the platforms of Radical left where vicious people are allowed to speak freely.

He also reveals plans to promote other websites and will make an announcement based on that.

Twitter stated earlier that it has decided to ban the account of Donald Trump for inciting violence in the country.

Pope Francis Appoints Bishop Kukah as Member of the Vatican…

Twitter also stated that his account and that of others are not above the rules of the management and cannot use it’s a platform to incite violence. 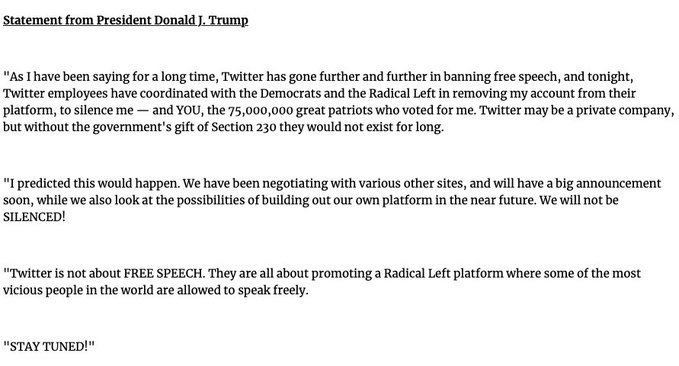 It wrote earlier, ‘After a close review of recent Tweets from the @realDonaldTrump account and the context around them we have permanently suspended the account due to the risk of further incitement of violence.

In the context of horrific events this week, we made it clear on Wednesday that additional violations of the Twitter Rules would potentially result in this very course of action.

Our public interest framework exists to enable the public to hear from elected officials and world leaders directly. It is built on a principle that the people have a right to hold power to account in the open.

However, we made it clear going back years that these accounts are not above our rules and cannot use Twitter to incite violence. We will continue to be transparent around our policies and their enforcement.”

‘Be Passionate and Not Violent’ – Melania Trump Says in Farewell…

Afenifere Blasts Presidency, Accuses It of Representing Only Fulani Interest

Akeredolu Fights Back, Accuses Presidency of Emotional Attachment to Herdsmen

Presidency Reacts to Akeredolu’s Call for Herdsmen to Vacate Foorest