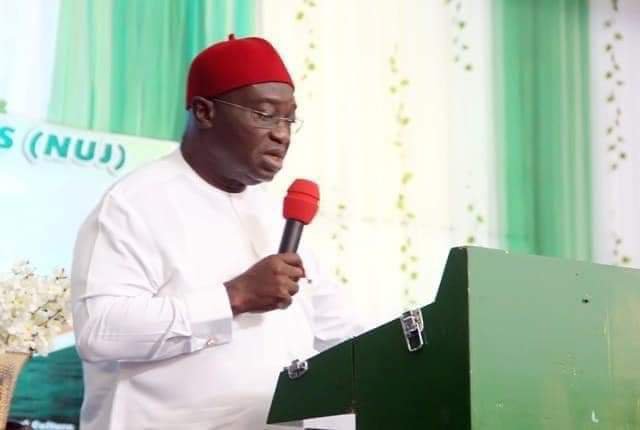 Governor of Abia State, Dr Okezie Ikpeazu has called on Nigerian journalists to rise to the challenge of engendering sustainable development through promoting positive narratives about the country.

Governor Ikpeazu who made the call in a keynote speech he delivered at the National Conference of the Nigerian Union of Journalists held in Port Harcourt Rivers State Monday disclosed that journalists have to alter, or, at best, balance out the narrative that negative news makes the best news adding that the approach has not served in the task of nation-building.

He enjoined media practitioners to start celebrating the nation’s genuine icons, mentors and outstanding citizens and uphold them as role models to the younger generation while emphasising that the media must continually extol the virtues of the likes of M.I. Okpara, Obafemi Awolowo, De Sam Mbakwe, Sir Abubakar Tafawa Belewa among others adding that they excelled in their assignments and made heroic sacrifices for the unity of Nigeria and promotion of social justice.

“Let me appeal to my friends, Gentlemen of the Press, to begin to be more intentional about framing our National Heroes and role models. Our media space today has become very toxic such that a lot of negativity is what makes the news. We can change that narrative and I call on the media to take up this challenge”, he said.

Governor Ikpeazu also stated that the media must down play ethnic bigots and local champions who seek popularity by propagating divisive rhetoric and promoting social discord adding that journalists have a role in turning around the pall of negativity and doom hanging over the nation today.

“Once again, I call on the Media to rise to the occasion. Our newspapers and other media stories are dominated by narratives from those benefitting from this crisis who seek an escalation of hostilities for their nefarious activities. The Media has a duty not to amplify those voices and not to undertake their task for them”, he admonished.

Continuing the Governor said, “The Media has a responsibility to save the country by deescalating the reportage of the activities of criminal elements”.

The State Chief Executive said that the media must stop giving voice to war mongers and rabid ethno-religious jingoists adding that the army of columnists in all media houses, editorials, story slant and reportage should begin to promote national unity and not division as well as stop blazing headlines that threaten the unity of the country.

Governor Ikpeazu called on Nigerian leaders across all strata to be mindful of the language of their public communication stressing that language matters a lot in communications and true leaders cannot use words that divide the nation instead of seeking for healing and unity.