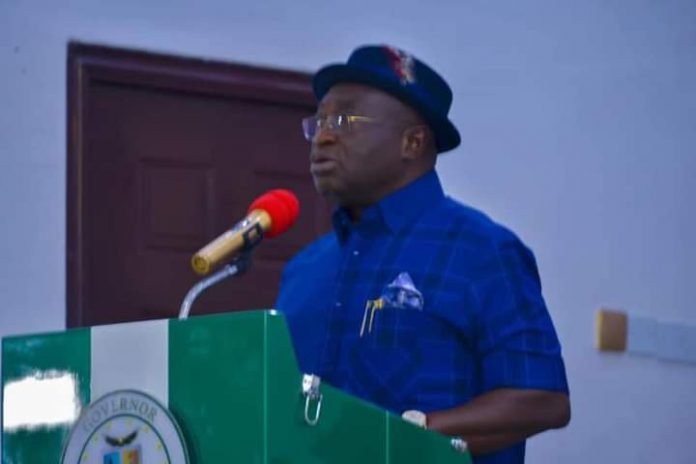 Governor Okezie Ikpeazu has sworn in 10 new Permanent Secretaries into the Abia State civil service with a charge for them to align themselves with the programmes and policies of his administration.

Speaking during the swearing-in ceremony held Monday at the Dr Michael Okpara Auditorium Umuahia, Governor Okezie Ikpeazu congratulated the newly elevated civil servants on the milestone they have attained.

He reminded them that greater responsibilities have now been entrusted on their shoulders to drive the statecraft as well as bring democracy dividends to the Abia populace.

The Governor noted that the newly sworn-in Permanent Secretaries have joined the quest at the top to make the Abia of our dreams a reality as well as become the vehicle to drive economic development in the State.

Governor Ikpeazu further enjoined them to take up the new responsibility with maturity and candour and expressed confidence in the capability of the appointees to acquit themselves creditably in the new assignment.

The state chief executive also charged them to carry other staff of their ministries along to realize the government’s policies and programmes for the state.

Responding on behalf of his colleagues, Deacon Uzoma Livingstone Isiakpu thanked the Governor for the elevation and honour did them and promised to bring to bear their wealth of experience in moving the state forward.

He pledged their commitment and unreserved loyalty to the administration as well as work in tandem with the dictates of the civil service.

The oaths of office and allegiance were administered on them by the Solicitor General of the state and Permanent Secretary, Ministry of Justice, Mrs Uzoamaka Ikonne.