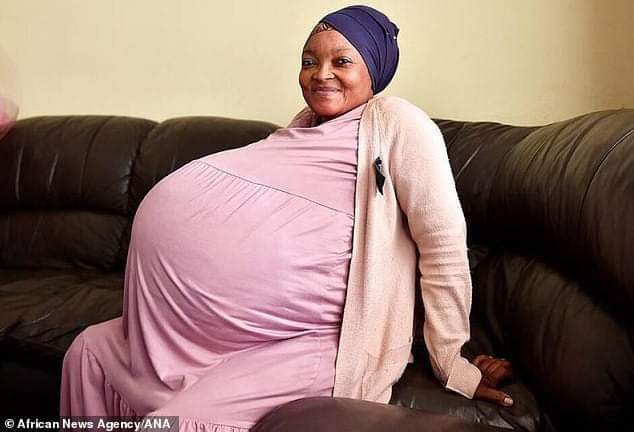 Gosiame Sithole, the South African woman who this month made headlines after saying she had given birth to a world record-breaking ten babies, fabricated the pregnancy story, it has been revealed.

Sithole, 37, said she had seven boys and three girls in Pretoria this month but doubts about her claim emerged when the supposed father, Teboho Tsotetsi, said he had yet to meet his children and accused his lover of a hoax to make money.

South African woman who said she had given birth to a world record-breaking ten babies, fabricated the pregnancy, officials confirm

Miss Sithole was then admitted to a psychiatric hospital.

After an investigation into her claim about birthing dectuplets it was revealed that doctors at Tembisa Hospital near the South African capital found Miss Sithole ‘did not give birth to any babies in recent times’.

The report conducted by local government officials added: ‘It has also been established that she was not pregnant in recent times.’

In a statement, the Gauteng Provincial Government said: ‘Miss Sithole was admitted to Tembisa hospital on 18 June 2021, and various medical tests were conducted on her to determine her state of health.

‘Initially, she was meant to be kept at the hospital for 72 hours, which lapsed on Tuesday.

‘Upon completing their preliminary examination, her doctors recommended that she be kept at the hospital for a further seven days for further observation, in accordance with the Mental Healthcare Act.

The editor of the news agency who first reported her claims has now apologised for not checking or verifying her claims before publishing.

Piet Rampedi sent his staff an email which said he knew the couple involved and had no reason to doubt them.

It read: ‘I used no investigative tool or checklist.

‘They had no reason to lie to me about the pregnancy. For me, it was a story of celebration.

‘Hence, I never demanded documentary proof of the pregnancy, such as scanners and clinic cards, for instance, as I would normally do with an investigative story.

‘However, judging by the sudden turn of events and the reaction from the government and our detractors, I was wrong.’