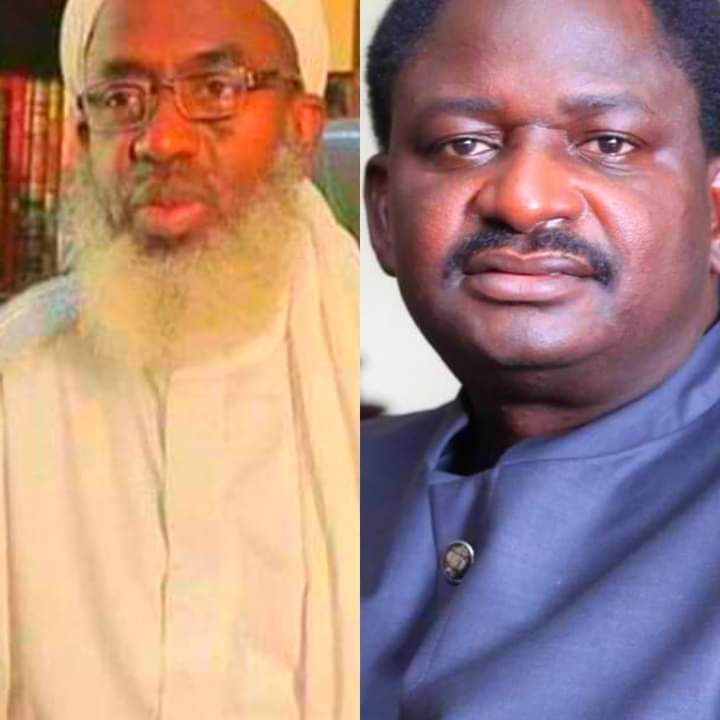 In response to a post, Controversial Islamic cleric, Sheikh Ahmad Gumi, has lambasted Femi Adesina, the Special Adviser, Media and Publicity to President Muhammadu Buhari, calling him a bootlicker.

Adesina had in an article on his Facebook wall on Thursday titled, “I like this pampering. Don’t you?”, described Sheikh Gumi indirectly as a “bandit-lover”.

Adesina quoted the cleric’s statement verbatim, noting that the cleric’s position on the military bombardment of the bandits is “false”.

“In the different evil forests, when the Nigerian Air Force strikes from the sky, the remnants of the evildoers not killed immediately attempt to flee. The ground troops then pick them off like flies. I say it again. One has never been prouder of our troops. They are cleaning up the country.

“Shocking and disconcerting, however, that in the middle of all these, you still hear words meant to discourage our gallant soldiers. A bandit-lover is on record as saying a military offensive would not work, and that the bandits “are going nowhere.” True? False. They are going somewhere. And that is: hell,” Adesina had said.

Responding in a post on Friday, Gumi who has been visiting bandits in the forest in an attempt to negotiate a peace deal with them described the President’s spokesperson as a ‘bootlicker’
He urged the Nigerian government to create a Ministry of Nomadic Affairs.

The cleric said, “You bootlicker that called me a bandit-lover! I am not one, but my country-lover, my region-lover, my state-lover, and my people-lover, and humanity-lover. I am a qualified Medical Doctor who knows what it takes to precisely excise a brain tumour without destroying the delicate surrounding brain tissues. I was a commissioned military officer who knows what the military is for and what is the capability of our military. I am an intellectual with a Ph.D. from Abroad. I am an Islamic scholar who knows the immorality of killing innocent lives. So, silence for me in this ocean of oblivion is not an option.

“Only a fool would allow his dwelling to be a theatre of war. Unfortunately, how many fools are there. Killing rats in your rat-infested sitting room with an iron rod will only end up destroying your gadgets and furniture probably without killing any. We should not mask out poor governance with artillery power. Some disingenuous people say: peace and negotiations with herdsmen bandits have failed, and your mission has failed!

“I said my mission has not failed but it was sabotaged or discouraged by the same influential people that benefit from the chaos or like us to destroy ourselves and leave the herdsmen in perpetual ignorance. Some said we have tried amnesty but it didn’t work. You didn’t try amnesty but tried amnesia. Amnesty without rehabilitation, reconciliation, and reparation is no amnesty. Ask the former Niger Delta Militants who killed security men in the past what an amnesty is. What stops us from having a federal ministry of Nomadic Affairs where their grievances and complaints will be addressed?

“All the bandit leaders we saw complained of how some repentant ones were picked and extra-judicially killed after the surrender of their weapons. Without their trust of the very unjust system all Nigerians complain of, which they took arms to fight, peace and negotiations with them will not work. This brings our role of mediation. They know as religious men we will not deceive them, and they came out in troops to meet us. To our astonishment, it is the same unjust system that turns round to betray our peace mission. Some of the press for giving a negative narrative, whom I also term criminals-in-purpose, some of the politicians who I see as urban-bandits who out of their share mismanagement of our meagre resources and misplacement of priority cause the death and infirmity of more people than the bandits affect.

“Of recent, how many Nigerians die of cholera -a water-born disease- because of lack of simple clean water to drink, or typhoid, malaria, and malnutrition? A nation with a maternal mortality rate of almost 500,000/annum because of the lack of adequate maternal health facilities and qualified staff. A country where its highly-priced medical personnel is looking for a window to escape the inferno. Such a country, please!

“By the way, what you may not hear, is that the bandits over the years have developed escape routes from aerial bombardments. They told us: you can only kill our women and children with your attacks!

“Just yesterday, two contingents of banditry victims came to me that their loved ones were abducted by bandits in Kaduna suburbs – Rigachukun and Keke. An escapee engineer in the later said, when he overheard and understood that they were strangers in the area as they were calling the locals to lead them, that gave him the courage to slip through densely grown maize plantations to escape. The point is that, if Zamfara is on fire for them, definitely it goes without saying that they will migrate to other areas. So, is the whole of Nigeria going to be under lock-up in incommunicado.

“As for the economic impact of the areas now under siege, it’s just a matter of time, you’ll hear them crying out. Already yesterday a man from Tsafe came begging because of economic stagnation, one would have thought that Gusau the capital is closer than Kaduna to beg.

“As for those cynics that have no value to add in the dilemma except vituperation, and abuses, we know that is the substance they are made up of. No qualms whatsoever! you don’t expect fragrance from feces. So, what is the solution?

“Good Intelligence! Good proficient policing, engagement of the local herdsmen in policing, rehabilitation, reconciliation, and reparation of all victims of banditry. A good honest judiciary protects people’s rights. Money and time well spent on these will surely kill the disease and heal the nation of this delinquency, crimes, and bad governance.”