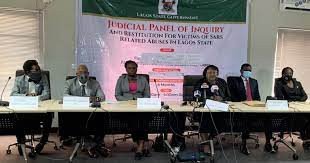 Live ammunition fired at #EndSARS protesters in Lekki Toll-Gate, Lagos was registered to the Nigerian Army, findings by a forensic company, Sentinel Forensic Limited have shown.

In its testimony before the Judicial Panel of Inquiry and Restitution set up for SARS related killings and Lekki Toll-Gate incident, the company’s representative, Joseph Kayode Funsho, said their findings confirmed claims that army personnel killed several protesters.

While the army had claimed that only blank bullets containing gunpowder were fired at the protest ground, the company told the panel that its findings also indicated that the blanks didn’t match records from the army, Vanguard reported.

The panel adjourned the hearing till Saturday, September 11.
The spokesperson for the Nigerian Army, Onyema Nwachukwu, however, did not respond to People Gazette’s request seeking comments on the company’s findings.

Since the incident occured on October 20, 2020, there have been controversies surrounding the fatality figure and the presence of the soldiers.

Many sources, including those from security sources, confirmed to The Gazette that several lives were lost, but the army initially denied its presence at the protest ground, claiming that the photos and videos were doctored. This was after a Nigerian celebrity, DJ Switch recorded a live session of the incident.
The army later admitted the presence of its personnel, but claimed that shots were only fired into the air to enforce curfew in the state.

In June, chief pathologist John Obafunwa who carried out an autopsy on 99 bodies said to be of slain #EndSARS protesters in Lagos, explained that three were confirmed to be from the Toll-Gate.
Photos presented to the audience via a display unit and sighted by The Gazette indicated that some of the bodies had bruises while others had deep cuts resulting from machete attack or high caliber gunshot wounds.

Meanwhile, the counsel to #EndSARS protesters, Yinka Olumide-Fusika (SAN), during the cross examination opposed the claims that only three bodies were from the Lekki Toll-Gate.

“I want to prove to this panel that the claim that only three dead bodies were brought in from Lekki is not true,” Mr Olumide-Fusika was quoted as saying.