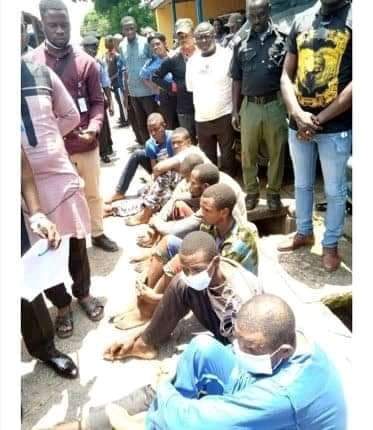 The Kaduna State Police Command said on Thursday that it arrested kidnappers of students of Greenfield University as well as students of the Bethel Baptist High School, all in the state.

Also in the police net are kidnappers of the 37 students of the Federal College of Forestry Mechanisation, Afaka, in Igabi LGA of Kaduna State.

Both the Greenfield University and the Baptist Bethel High School are located in Chikun LGA of the state.

While parading suspects on Thursday at the Command’s Headquarters along Bida Road in the state capital, the Command’s spokesman, Mohammed Jalige, also announced the arrest of the suspected killers of 36-year-old Captain Abdulkareem Na’Allah, a pilot and son of Senator Bala Na’Allah.

Jalige said one Usman Mohammed from Bukuyum in Zamfara State was apprehended by operatives of the command in connection with the kidnap of the students of Greenfield University, Federal College of Forestry Mechanisation, Afaka, as well as Bethel Baptist High School, all in the state.

He said, “On the 29th August, 2021 at about 0900hrs, based on credible information, Operation Yaki Surveillance team with FIB STS Force Headquarter, Abuja, jointly raided a house along Ring Road, Asikolaye area of Kaduna, where one Usman Abubakar, ‘m’ 41 years old, a native of Adakpa village, Bukkuyum LGA of Zamfara State, a notorious kidnapper terrorising Chikun, Igabi and Giwa LGAs of Kaduna State, was arrested.

“He confessed to have kidnapped many people and collected several ransoms; he also has links with recent attacks on Greenfield University, Bethel Baptist Academy and School of Forestry Mechanisation, Mando, Kaduna.”

Speaking on the killers of Na’Allah’s son, the police spokesman noted that two of the three members of the gang that killed the pilot were in the custody of the command while one was at large.
He named one Bashir Mohammed, a neighbour of the slain pilot as principal suspect, while identifying another suspect as Nasir Salisu, also known as Uban Dana, adding that the third suspect, one Usman Kano, was at large.
Jalige explained that the three suspects conspired, broke into the house of Captain Abdulkarim and killed him before taking away his SUV vehicle and other valuables.
He added that the suspects sold the late pilot’s SUV vehicle in Republic of Niger at the cost of N1m.

Meanwhile, Jalige said operatives of the command killed one notorious bandit, while a driver and his conductor were unfortunately killed in crossfire along the Kaduna-Abuja highway.
Jalige said the incident happened in the early hours of Thursday when bandits in large numbers blocked the Kaduna-Abuja highway and shooting indiscriminately at motorists plying the road.