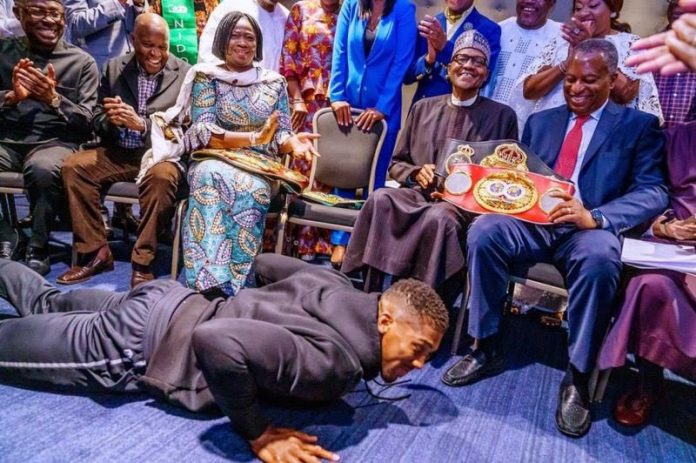 Heavyweight boxing champion Anthony Joshua has come under heavy criticism after he was defeated last night in the fight against Ukrainian Oleksandr Usyk.

Joshua lost his three titles of IBF, WBA, WBO belts to the 34-year-old Usyk after a unanimous decision following 12 rounds at the north London stadium which also dashed his hope of a showdown with Brit Tyson Fury.

Many Nigerians revealed that Joshua got the ‘ill-luck’ when he met President Muhammadu Buhari and showed off his belts.

IPOB Broadcaster Simon Ekpa wrote, “I told Anthony Joshua for meeting a man called Buhari, he will start losing fight. Now Anthony Joshua loses heavyweights title to Oleksandr Usyk. Where are village people who introduced him to the Presidency in London, have you seen it? It is all your fault, we warned you.”

Lawyer Abdul Mahmoud wrote, “The loss to Usyk has nothing to do with that much-publicized prostration at the feet of Bubu, or what many now sees as failure’s contamination of his belt. AJ has never been a pugilist of the finest tradition. He’s just: fine boy AJ.”

The painful part be say Usyk come give glory to Jesus Christ for victory. E mean say Joshua no remember God’s promise to am that no man shall be able to stand before him??? Because em fight like Amalekite yesterday 😩”

Lord KSI wrote, “You lot need to understand that USYK is a beast. Man cleared out the cruiserweight division. Came up to heavyweight and out boxed AJ. Legit congrats Usyk 🙌🏿”

However accepting his defeat, Joshua tweeted Joshua tweeted: “Keep positive even if the world’s crumbling in front of you! London I love you & thank you each and every time!”

Meanwhile, Joshua has hinted of a rematch between with Usyk and assured fans that a fight with Fury can also happen in the future.