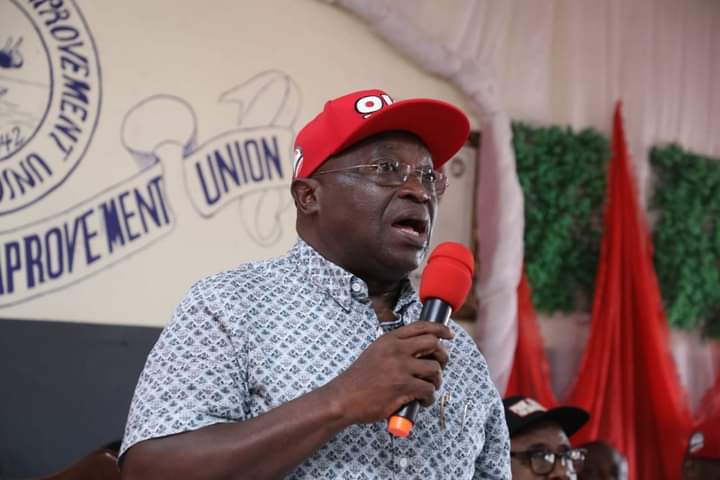 Governor Okezie Ikpeazu has described the people of Abiriba in Ohafia LGA as his traditional and trusted political allies.
Governor Ikpeazu made this assertion today at a special Town Hall meeting he had with the Abiriba Community in Aba today where he formally informed them of his plans to represent Abia South Senatorial District at the Senate of the Federal Republic of Nigeria.

Okezie Ikpeazu has stated that his vision for Abia South is to bring federal presence to the zone by constructive and result oriented engagement with the federal authorities.

At the meeting held at the Abiriba Communal Improvement Union Hall, Jubilee Road by East Aba, the Abiriba people endorsed Governor Ikpeazu and all PDP candidates in the forthcoming elections.
He regretted that there is no federal presence in the area but emphasised that the time has come for Abia South to have a voice in Abuja to change the narrative.

The Governor attributed the recent protests and blockage of the Aba -Portharcourt federal road by trailer drivers to the frustration arising from the deplorable condition of the Federal road leading to the very difficult economic conditions for our people. He reminded the people of Abiriba that if not for thr bypass constructed by his administration which made it possible to link Aba with Ikot Ekpene, it would have led to the closure of the Aba – Akwa Ibom commercial corridor.

Governor Okezie Ikpeazu traced a greater development of Aba to Abiriba people, who have always contributed to the economic development of Abia State and described them as resilient , hardworking and people of courage and firm character.

He disclosed that he has awarded the contract for Ugwu Court road in Abiriba and informed that the contractor would be mobilized to commence the construction this month, adding that he is mobilizing for the construction of Ulasi road in Aba and assured that the remaining part of Abiriba ring road will be completed. He said he is relying on his relationship with Abiriba people and other residents of Aba to win his senatorial bid and assured the he will keep his promise and convenant with them .

The Governor who urged the Abiriba people and all Abians to support all PDP candidates to victory,recommended that the best thing to do in the State is to vote Prof. Uche Ikonne, saying he is reliable, adding that a vote for Prof. Ikonne is a vote for the Abiriba Community.

In their separate speeches the Member representing Aba Central at the State House of Assembly, Hon. Sir Abraham Oba, his Ohafia North counterpart, Hon. Mandela Obasi and the Pro Chancellor/Chairman of the Governing Council of the Abia State University,Uturu, Chief Mba Ukariwo assured that they will mobilize Abiriba people for the actualization of the senatorial ambition of the Governor. They equally urged their people to pull resources together for the five over five victory of the PDP come 2023 which he noted will advance the socio-economic and political fortunes of their people.

They extended their gratitude to Governor Okezie Ikpeazu for appointing their sons into positions of authority including Chief John Okiyi Kalu , Chief Mba Ukariwo, Prof. Mkpa Agu Mkpa among others and noted that it is time to reciprocate the love shown them. They appealed to the Governor to fix Agbor Court road complete remaining part of the Abiriba ring road.