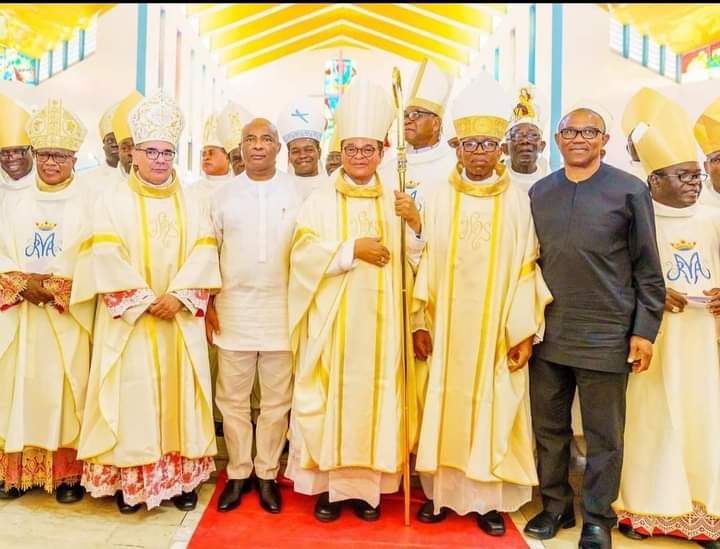 Imo State governor, Senator Hope Uzodimma has described the newly installed Archbishop of Owerri Catholic Ecclesiastical Province, Archbishop Lucius Iwejuru Ugorji as a round peg in a round hole, who will bring his over 40 years of priesthood experience to bear in the discharge of his duties.

He expressed optimism that the new Archbishop will surpass the expectations from all quarters, including that of the Holy Sea (Rome/Pope)

He promised that as a Christian and a Catholic who have unwavering respect for the church and its leadership, he will continue to partner with the church to offer quality service to the people.

In his speech, the new Archbishop His Grace, Lucius Iwejuru Ugorji expressed appreciation to God for what he described as His unfathomable goodness to him. For programming his life more than he could have ever imagined and offering him golden opportunities to serve Him and His church in different capacities; as a priest for 45 years, as Bishop of Umuahia for 32 years, Apostolic Administrator of Ahiara Diocese for four years and now as the Metropolitan Archbishop of Owerri Ecclesiastical Province.

He extended appreciation to Pope Francis for finding him worthy of the onerous task and reaffirmed his unalloyed loyalty and allegiance to the Pope as the Vicar of Christ and successor of St Paul.

Archbishop Ugorji heaped praises on the outgoing Archbishop, AJV Obinna who he said made enormous sacrifices for the growth of Owerri Archdiocese and Owerri Ecclesiastical Province in general. He prayed God to grant him good health, joy and interior peace as he commences his well deserved retirement as a highly respected Archbishop Emeritus

“You are leaving behind, very large shoes to be filled, but thanks to God, that as your successor, I have no ambition to step into those big shoes. I am coming with my own customized shoes”.

The new Archbishop expressed appreciation to all the powerful dignitaries who graced the occasion, including; Present and past governors, present and past deputy governors, Senators, House of Reps members, Archbishops, Bishops, priest and other church leaders, leaders at various exalted positions, captains of industries and professionals from different fields of human endeavor for honouring him with their presence.