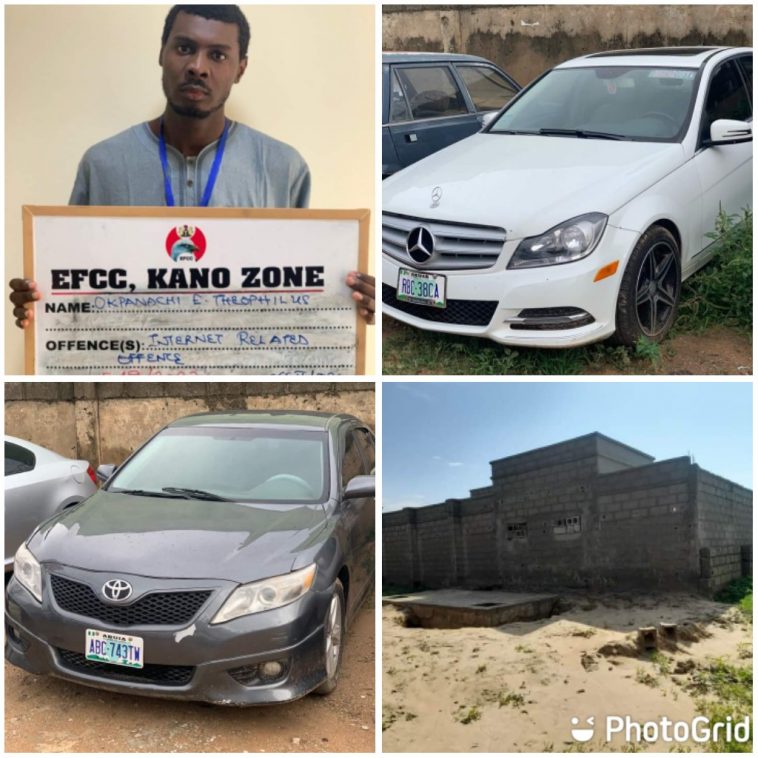 The Kano Zonal Command of the Economic and Financial Crimes Commission, EFCC, has secured the conviction and sentencing of the duo of Olalekan Adekola Adeojo and Theophilus Ehoghcho Opanachi to six and five months imprisonment respectively before Justice Husaina Adamu Aliyu of the Jigawa State High Court on a four-count charge each bordering on cheating and obtaining by false pretence.

The convicts who are graduates of Federal University, Dutse Jigawa State, were arrested on the 3rd June, 2022 by the operatives of Department of State Services, Dutse, Jigawa State, following an intelligence report on the involvement of some youth in internet-related frauds at Mallam Inuwa Dutse Housing Estate Danmasara Quarters.

They were subsequently handed over to the Commission for further investigation.

Theophilus was found to have obtained the sum of $8,012.58 (Eight Thousand, Twelve Dollars, Fifty Eight Cents from eleven victims – all foreigners.

It was also discovered that he acted as picker for other internet fraudsters currently at large, by redeeming the Cryptocurrencies fraudulently obtained from their victims for which he benefitted a total sum of N5,845,984.03 as commission.

Furthermore, it was also discovered that gifts worth Four Million, Seven Hundred and Forty Eight Thousand, Eight Hundred and Two Naira, Four Kobo Only (N4,748,802.04) was fraudulently obtained by Theophilus through the trio of Oyibo Abdulwahab, Precious Andrew and Okpanachi Victor for redemption.

Adeojo, on the other hand, obtained the sum of Twenty Six Million, Eighty Five Thousand, Six Hundred and Seventy Seven Naira Only (N26, 085,677) from two victims.

The two defendants pleaded guilty to all the charges preferred against them by the prosecution.

In view of their pleas, counsel for the prosecution, Aisha Tahar Habib, asked the court to convict and sentence them accordingly.

The judge also ordered the forfeiture of an uncompleted building and a 2013 model Mercedes-Benz C-Class belonging to Adeojo and a Toyota Camry owned by Theophilus.

All the laptops and cell phones which were used as instruments to commit the fraud were also forfeited to the Federal Government.