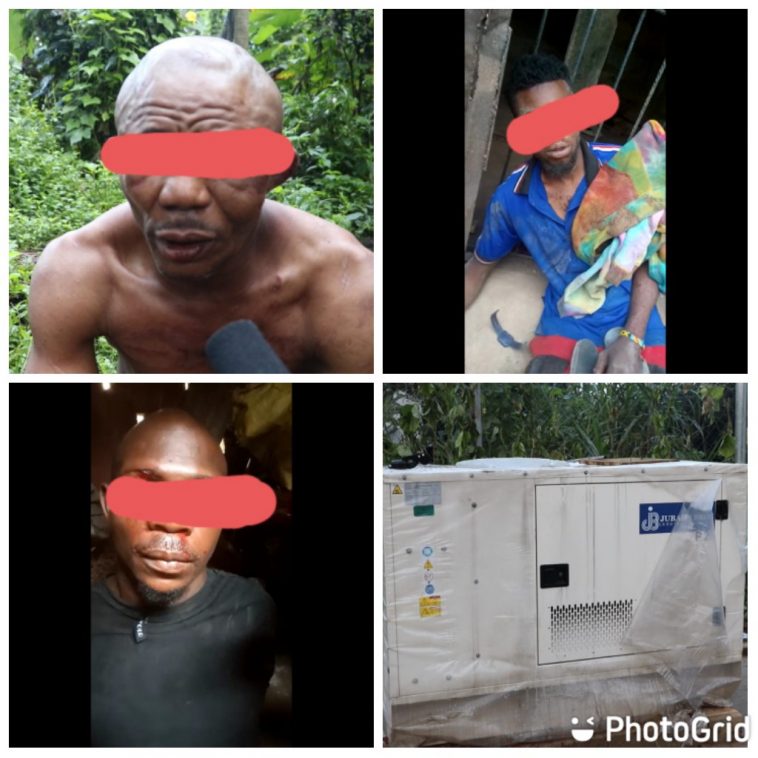 A gang of suspected criminals have been intercepted by the people of Umuezeukwu of Isiala Ngwa North Local Government Area of Abia State with the aid of its vigilance group on Tuesday night.

The suspects are the 43-year-old father of two who identified himself as Ikechukwu Ifitu from Agbani in Enugu State community Ikechukwu Anya, who hails from Amekpu Ohafia in Abia State and Samuel Chijioke, another member of the gang who hails from Ehime Mbano in Imo State.

Luck ran out of the suspected criminals when it attempted to cart away a soundproof power generator which was provided by a telecom company that, according to the people, was only brought in last Saturday to erect a mast which will provide a solution for the issue of poor network connection the community have experienced over the years.

The vigilance group also intercepted the vehicle of the criminals.

Upon investigation, Ikechukwu Ifitu revealed that he was the bus conductor and the gang was there to vandalise rail lines and not to steal the generator.

“Ikechukwu Ifitu is my name. I got the advance payment for the job around 6 PM and suggested we commenced loading immediately but the gang refused and told me it’s only loaded at night. We were still on the way when torchlights flashed on us and the driver reversed and got stuck in the gutter.”

The claim was punctured by Samuel’s confession as he disclosed that Ikechukwu Ifitu was not his real name but Chidiebere Ewuche. He also revealed that his boss (Chidiebere) introduced him to the job and that was his first time.

While Ikechukwu Anya stated that it wasn’t his first time stealing a soundproof generator as he has stolen from Owerri and Onitsha. He further stated that they were contracted by a man whom he called pastor and a suspected native of the community.

The suspects were handed over to the operatives of the Rapid Response Squad, RRS, as one of the victims of thefts in the area identified their vehicle.

“This is the same vehicle with which they stole our soundproof generator last month.”

Items recovered include a steel roller, one heavy-duty bolt cutter, a vehicle jack, a spare tyre, screwdrivers and spanners.