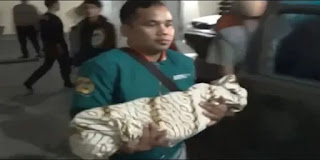 A dad bit his four-year-old son to death – leaving him covered in wounds – because he found him ‘cute enough to eat’, it was claimed.
The 28-year-old, who faces a murder charge, allegedly chewed on his son to show affection for him while on a trip to the beach.

His wife got a call saying the boy had been taken to hospital where he died shortly afterwards.Police questioned his dad, identified only by his initials HB, who told them the boy, identified as AM, had been injured in a motorcycle accident.
But police suspected he was lying after they carried out an autopsy on the tragic youngster.


After being questioned by police the father admitted biting the boy several times on Saturday…He used the term “gemes,” which is an Indonesian word describing the urge to bite or pinch something cute.The closest equivalent in English is the expression “You’re so cute I could eat you up”.