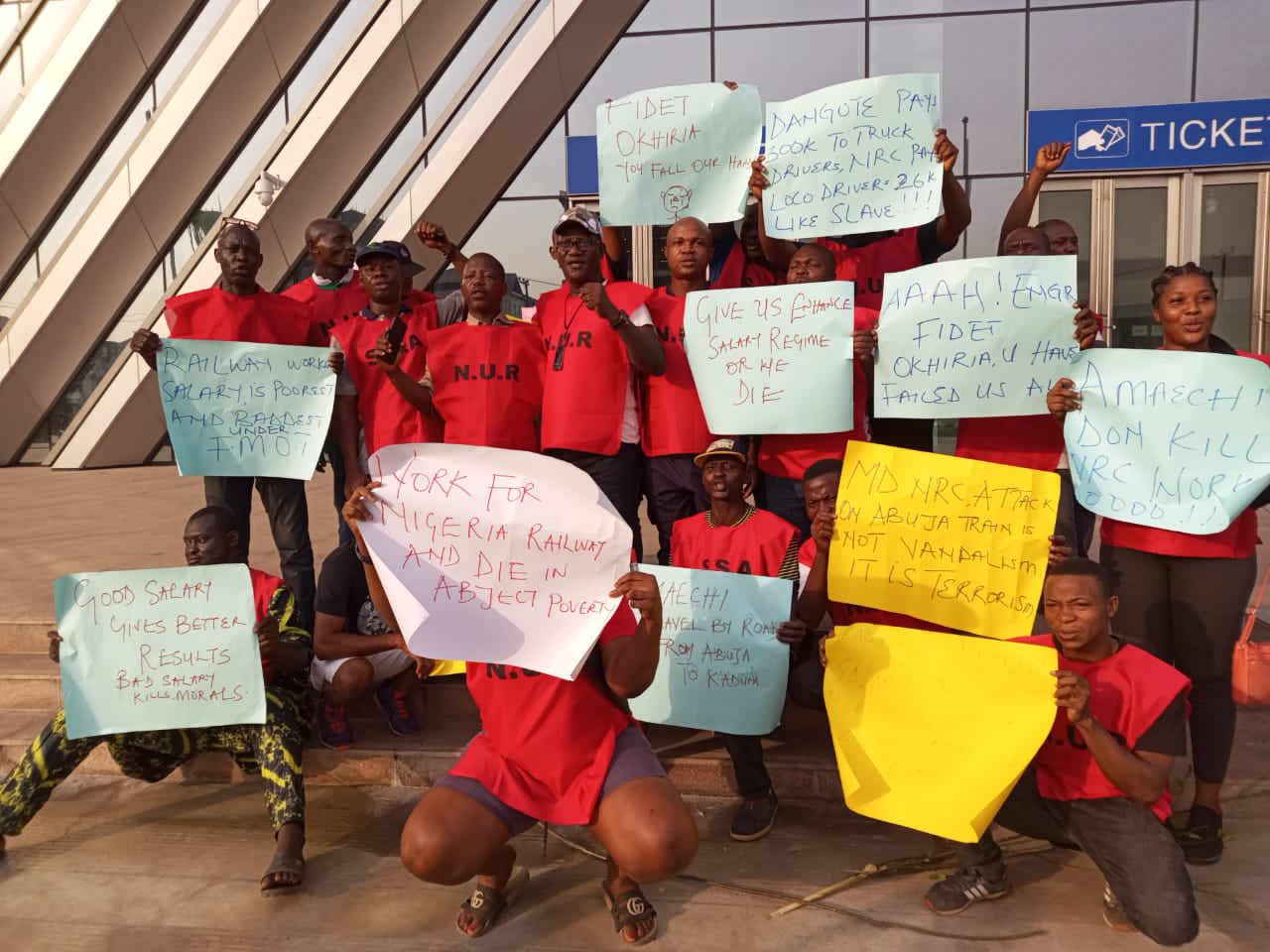 The Nigerian Railway Corporation (NRC) which comprises members of the Nigeria Union of Railway Workers (NUR) end Senior Staff Association (SSA) in Lagos has begun a three-day warning strike on Thursday over the poor condition of service.

With several inscriptions written on the placards, they chanted solidarity songs as they headed to the NRC headquarters in Ebute Meta.

People’s Gazette reported that the General Secretary of NUR, Segun Esan, who spoke on behalf of the protesters, stated that the warning strike was called over poor welfare and inadequate remuneration for workers.
Mr Esan listed workers demands to include increased remuneration, individual life insurance for staff, payment of outstanding promotion arrears and outstanding salaries, among others.

He said the railway transport sector was a social service and its workers must be appreciated and adequately compensated.
He said that the federal government invested billions of dollars on building rail transport infrastructure and transforming the system to a modern railway system but was not investing in human resources.

He appealed to the Minister of Transportation, Rotimi Amaechi, to stop ignoring the plight of the railway workers.
“Workers earning N30,000; N32,000; N26,000, depending on what you take home after deductions from your very meagre and near to the ground salary.

“Quite unfortunately, the locomotive entrusted into the hand of the loco driver is worth over and above N500 million.

“And you are entrusting such equipment into the hands of a worker that is very grossly demotivated? Very poorly remunerated, made unhappy and working under most anti worker conditions of work.

“And this is why we have come out to say, we are saying no, to further slavery.
“They insured the lives of the locomotives but the lives of our loco drivers, of our train checkers, of all the train crew are not insured individually apart from the group life assurance that is automatic because the government put it there.

“But look at what happened in Abuja-Kaduna railway when our train was attacked, let’s just imagine they succeeded in killing some of the railway workers and their passengers,” he said.
There was no senior NRC official to address the protesting railway workers as the corporation’s Managing Director, Freeborn Okhiria, was reportedly out of town.

Reacting to the strike, the former Senatorvrepresenying Kaduna Central, Shehu Sani, urhed the Federal Government to listen to the workers and meet up their demands.

“The strike action embarked upon today by workers of the Nigerian Railways is legitimate and a step in the right direction. The FG should listen to them and meet up their demands.”