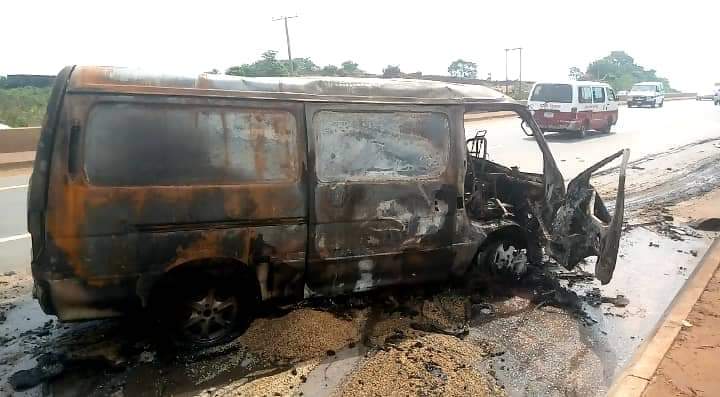 Two Reverend Sisters whose names are not yet disclosed, their driver and a husband and wife have been burnt to ashes after their vehicles crashed at the Nawfia axis of the Enugu-Onitsha Expressway, Anambra state.

Investigations revealed that the Reverend Sisters, Principal and Bursar of Handmaid’s Secondary School, Amansea, Awka North LGA, and their driver, were traveling to Amansea in a Toyota Hiace bus belonging to the school, and were coming from Ifite-Ogwari, Ayamelum LGA, where they went to purchase bags of rice for the school.

Other victims in a Toyota Highlander were identified as Mr Emmanuel Okeke, former Anambra State Government Storekeeper, and the wife.

Mr Ifeanacho Okeke from Nsugbe, Anambra East LGA, who spoke at the accident scene said he spoke with his brother, Emmanuel around 5pm yesterday, and around 9pm his and the wife’s lines were off, leading to search and the sad discovery early this morning.

An eyewitness, Mr. Chinecherem Okonkwo from Nawfia, Njikoka LGA, said he arrived the accident scene yesterday night during light rainfall when the vehicles were still burning, but it was late for any meaningful help.

Reverend Fathers and Sisters were seen at the accident scene discussing in low tones, while others helped in taking the vehicles off the single lane of the Expressway for free flow of traffic.