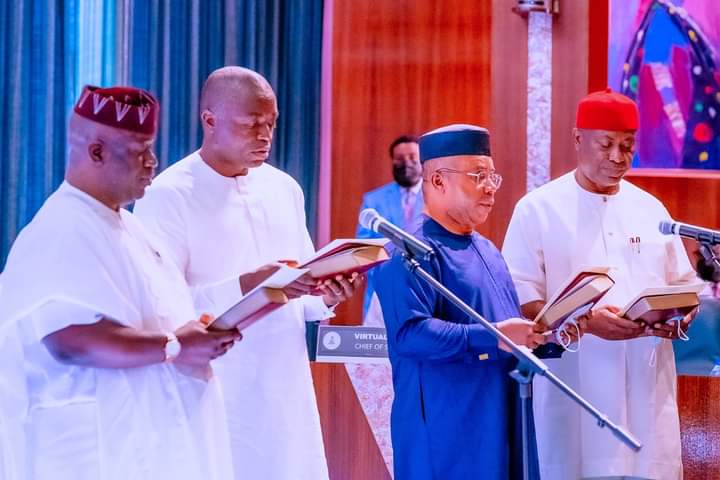 President Muhammadu Buhari has sworn in the new members of his cabinet on Wednesday in Abuja, a few hours after his convoy was attacked.

President Buhari also assigned portfolios to the new ministers and charged them to serve the nation diligently.

Meanwhile, the convoy of the President was attacked while the Assistant Commissioner of Police, Aminu Umar, was killed alongside a junior officer in the Zakka forest of Safana LGA of Katsina State on Tuesday.

The Spokesperson for the Katsina Police Command, Gambo Isah, confirmed the gruesome murder of Mr Umar via an electronic statement to People’s Gazette.

Mr Isah said the police had received a distress call about the activities of the terrorists, numbering at least 300 on motorcycles with Ak47 rifles, before they attacked the deceased.

The spokesman stated that the “recalcitrant terrorists” killed Mr Umar after an exchange of gunfire.

“Consequently, the Area Commander and one other gallantly lost their lives during a cross-exchange of gunfire,” Mr Isah added.