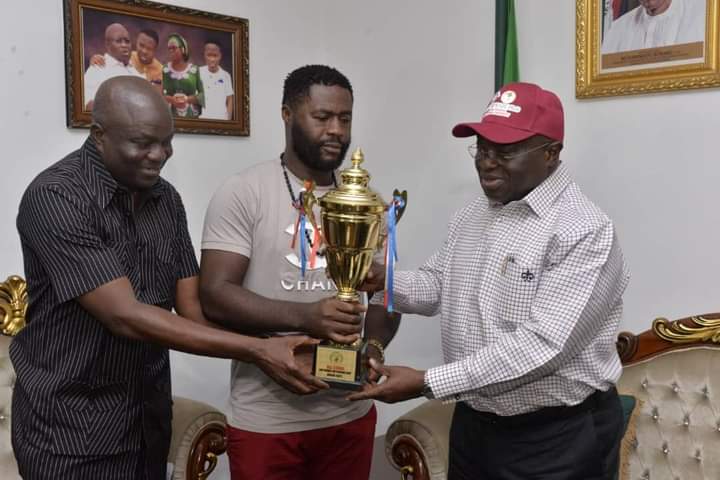 Abia State Governor Okezie Ikpeazu has assured that his administration would continue to support sports development in the state.

Governor Ikpeazu stated this at the Governor’s Lodge Aba on Friday, when the leadership and members of the Aba All-Stars Football Club presented him with the National Veteran All-Stars Football Trophy won by the club on behalf of the state.

A statement by Onyebuchi Ememanka, the Chief Press Secretary to the Governor disclosed that the Governor described sports as an avenue to engage youths, congratulated the team for achieving the milestone and expressed happiness that Abia came tops in the competition.

He noted that his adminstration has put Abia on the part of sustainable development, assuring that it would continue to prioritize the welfare of citizens.

The Governor assured them of his administration’s support in the next National Veterans Finals Tournament billed to hold in Benin City,Edo state by October.

Earlier in his address, the Chairman Aba All Stars Football Club, Mr Aloysus Olisaegbo said they came to present to the Governor the National Veterans All-Stars Trophy won by the club on behalf of the state and the entire South East Zone.

They commended the Governor on his landmark achievements including the completion of Osisioma Flyover and upgrade of the Enyimba Sports Stadium and assured that they would work towards his emergence as the the next Senator representing Abia South.

The delegation included football veterans who have done the state and nation proud in National, CAF and FIFA Tournaments including Obinna Nwanneri,Emeka Nwanna and Ndidi Anumunu amongst others.