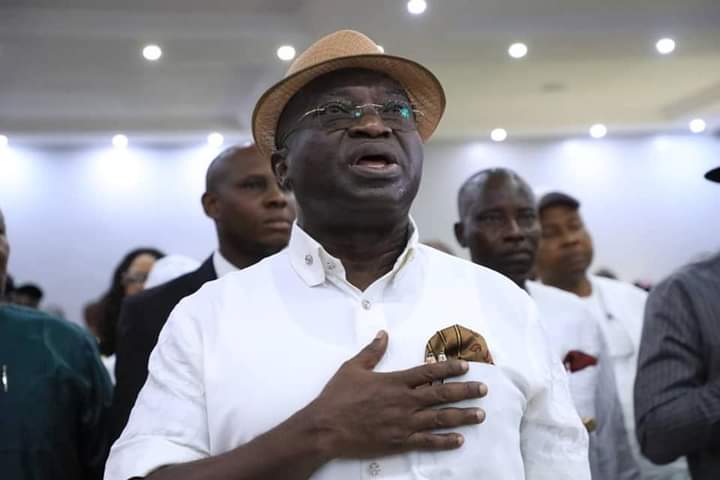 Governor Okezie Ikpeazu has stressed the need for Ndigbo to develop a philosophy that will serve as a guide for their dealings and development as a people.

Governor Ikpeazu who was speaking at the Okezie Victor Ikpeazu Leadership Colloquium with the theme: “Socio-economic future of Ndigbo, Setting the Agenda” as part of activities to mark his 58th birthday celebration held at the Ishmael Ikpeazu Memorial Library and Center for Scientific Leadership, Umuobiakwa, Obingwa said that Ndigbo must know who they are and where they are heading.

The Governor said Ndigbo must go the extra mile and overcome factors such as insecurity as well as other challenges that have hampered the development of the region.

He stated that lack of belief in themselves and absence of an Igbo philosophy which have held the region down should be addressed in order to conquer the world , adding that digitization and new ways of solving problems should be given attention.

Governor Ikpeazu who said he would want to remembered for his intervention in the Enyimba Economic City project and the Geometric Power Project, disclosed that 150 Abia youths have been sent by his Government and are currently studying modern auto mechanics at Innoson Motors.

The Governor called on the Igbo Business Community currently outside the region to invest back home and decried the habit of having all their investments outside Alaigbo.

In his remarks, the Abia PDP Governorship Candidate for the 2023 General elections Professor Uche Ikonne while noting that Governor Okezie Ikpeazu has continued to provide platforms to champion the socio-economic development of Abia and Alaigbo in general , added that if elected the next Governor, part of his blue prints will be the establishment of an Aba Development Authority where key stakeholders and business leaders in the town will be part of the system, as part of his concept of participatory governance.

In their separate speeches, the PDP Board of Trustees Chairman, Senator Adolphus Wabara, and Sir Chris Odinaka Igwe, OFR appreciated the Governor’ for laying a solid foundation for the development of the state and stressed the need for Igbo business men to leverage the opportunities in the South East.

In their contributions during the panel discussion, the panelists, including the President NACCIMA,Ide John Udeagbala , the CEO Geometric Power, Professor Bath Nnaji, the operator of the Enyimba Economic City Mr. Daal Uzu and Professor Gabriel Okenwa said that it is time for Igbo business men to think home, repatriate a chunk of their investments and knowledge back home as well as be united to chart a common course.

They are of the view that the Ndigbo must harness their best areas and used the forum to congratulate Governor’Okezie Ikpeazu on his 58th birthday celebration.

Chairman of the occasion and former PDP Presidential Aspirant, Mazi Sam Ohuabunwa noted that consistency in policy formulation and implementation are critical to development and tasked Abians to support the emergence of Professor Ikonne as Governor of Abia State to consolidate on the foundations already laid by Governor Ikpeazu.

Highlights of the ceremony was the unveiling of the book “Okezie Ikpeazu- Raising the Bar of Governance in Abia state” authored by Mr Obiora Nzekwu and formal Commissioning of the Ishmael Ikpeazu Memorial Library and Center for Scientific Leadership.

Deputy Governor Sir Ude Oko Chukwu and several other dignitaries from the political and business worlds, from across the country graced the occasion.