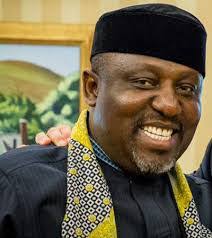 The governor of Imo State, Rochas Okorocha, has announced automatic promotion for all workers in the state civil service, with the exception of those who are newly employed.


He also promised that because of the fondness he had for the workers, he could also approve sleeping allowance for them.

Okorocha announced the automatic promotion in his address at the 2018 Workers’ Day celebration, which held on Tuesday at Heroes Square in Owerri.