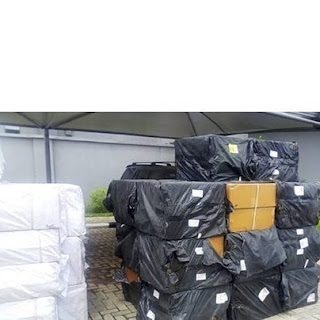 Many cartons of tramadol estimated at about 4000 kilogrammes have been intercepted by the Murtala Muhammed Airport command of the National Drug Law Enforcement Agency (NDLEA).


NDLEA Commander at the Lagos Airport, Garba Ahmadu, who unveiled the seized tramadol to newsmen at the airport, said the interception was made through intelligence information received from its foreign counterparts.

It was learnt that the tramadol was imported into the country from India and intercepted at the cargo shed of the Skyway Aviation Handling Company (SAHCOL).

For about one month, no cargo agent showed up to claim the consignments prompting the agency to take possession of the items.

The NDLEA boss disclosed that the psychotropic substance consists of capsules and tablets of 225 and 125 milligrams respectively far above the 50-100 milligrams of dosage approved by the government.