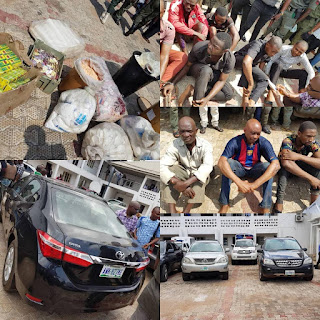 The Anambra State Police Command has busted an 11-man car snatching syndicate operating in the state. Commissioner of police in the state, Mr. Garba Umar, who paraded the suspects, said it recovered 11 exotic cars of various brands which were disposesed from their owners at gunpoint by the suspects.

The cars included various choice cars, ranging from Lexus, Mercedes Benz and Toyota products among others, most of which were sports utility vehicles(SUVs).
The commissioner, who paraded the suspects at the state police command headquatres, Amawbia said the command had to redouble its efforts in protecting the lives and property of the people of the state following increasing incidences of car theft and snatching.
Others arrested for the same offence were Johnson Aerfa,Chibueze Ebenyi of Usho village, Ondo State, who was said to be the sponsor of the gang, as well as Chibuike Ugwu.

Meanwhile, on 22nd April, 2018, combined team of the Command and team of National Task Force on Importation/Manufacturing of Fake/Adulterated/Substandard Drugs/goods searched and recovered various quantities of suspected adulterated/expired drugs in a ware-house being owned by Odesco Pharmaceutical Industries Nig.Ltd and OGB Frank Industry Ltd situated at Ideke village Iyiowa Odekpe in Ogbaru L.G.A. of Anambra State.
Suspect would be charge to court for prosecution at the end of investigation.