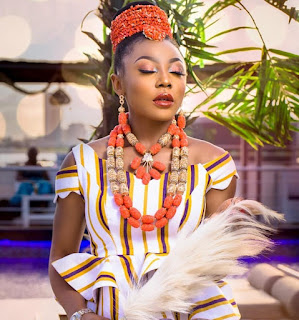 Former Big Brother Housemate Ifuennada have revealed in a post that she have not gotten over her ex who got married three weeks ago but that marriage is not in her plate anytime soon. She revealed this on her social media handle after posting posting this bridal picture.
Read her post…

ifuennada I like to look at the bride I was for this photoshoot, but I don’t think I have the balls to consider marriage anytime soon. Most people will never be faithful, the ones you love are usually the ones who hurt you the most. I still haven’t gotten over my Ex who got married 3wks ago… I didn’t see it coming. He was my best friend and confidante, but look what he did… A friend said I was asking after him in my sleep few days ago… I think I want to be like saint Paul, live for God and help as many people as I can. I want to be obsessed with being successful and helping others that I don’t think of falling in love ever again.

Love is beautIFU – the agape kind, the Jesus kind. The kind of love I want to show everyone around me, both foes and friends.