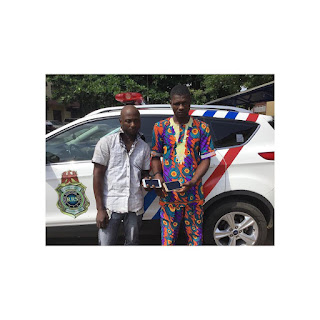 The Operatives of Rapid Response Squad of Lagos State Police Command have arrested two suspects who specialized in stealing mobile phones from their dates and prostitutes after lodging them in motels and sell to other prostitutes.

The suspects, Semiu Obanla, 35, and David Edet, 32, both married, were arrested at an hotel in Abule-Egba, Lagos, after a stolen phone was tracked to the hotel where they lodged.

In his confession to the police, Semiu said, “David and I met at a site in Ikorodu where we both worked as labourers before extending the working relationship to friendship.

Sometime in February this year, I reconnected with David. I invited him after he had attempted to raise money through ‘Yahoo – Yahoo’ but failed.

We connived to start stealing phones and valuables from our dates and prostitutes because David and I do visit the brothels for sexual pleasures after our daily work.

We had two unsuspecting prostitutes who believed we were good customers but didn’t know our motive. We agreed for #5,000 for a night for each of the prostitutes. .

We payed #3,000 for the lodging overnight at a nearby motel which we used regularly. As planned, David was to sneak into my own room at around 3:,00 a.m, steal my phone and hers. .

In the morning we began to look for the phones, to the point that even the hotel workers joined us. The following morning, David and I discovered her phone was an itel phone, which we sold for N20,000 to another prostitute in Abule-Egba, Lagos.”

Recovered from the suspects were two android phones. The suspects have been transferred to the SCID for further investigations.