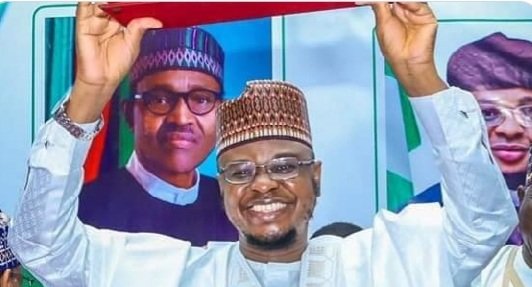 There are basically three legitimate ways to become a professor: by climbing the professional ladder in a university; by being appointed to the position from outside academia in recognition of vast and varied industry experience or artistic wizardry in a field; and through a courtesy appointment. Isa Ali Ibrahim Pantami’s record does not qualify him for any.

Let’s start with the first. Pantami’s undergraduate degree in computer science from the Abubakar Tafawa Balewa University (ATBU), Bauchi, was earned in 2003.

That’s less than 20 years ago. When he started his academic career as a Graduate Assistant at ATBU in 2004, the computer science department that awarded him his bachelor’s degree rejected him because his degree was “weak”; he was instead employed in the Information Technology section of the Faculty of Management where he also got his master’s degree in 2010/2011 and got promoted to Assistant Lecturer.

In 2011, he got the Petroleum Trust Fund Development (PTDF) scholarship to study for a PhD at the Department of Management in the Aberdeen Business School of Robert Gordon University, which he earned in August 2014.
Upon his return to ATBU, he was promoted to Lecturer 1—skipping one rank. He requested to be promoted to Senior Lecturer but was denied because he had insufficient publication record to justify his request. He resigned in protest and took up an appointment at the Salafist, male-Muslim-only Islamic University of Madinah as an Assistant Professor of Information Science.

In 2016, he accepted a government appointment as DG of NITDA and has never returned to academia since then.
Now, three criteria are used to promote academics: teaching, research, and service. Pantami’s entire university teaching record is less than 10 years—if you consider that he never taught either at ATBU or at Robert Gordon University (although he lied that he did during his senate confirmation hearing) during his three years of doctoral studies.
His research output is even more underwhelming.

Although he brags about having “over 160 publications,” his actual scholarly output is really thin for someone who wants to be a professor. When I checked SCOPUS, the well-regarded database of top-level, peer-reviewed academic journals, using his legal name, that is, Isa Ali Ibrahim (Pantami is the name of his neighbourhood in Gombe town, which he doesn’t legally bear), only three articles and one citation came up.

Of the three articles, he is the single author of one (which is actually only a 2-page country report) and a distant co-author in two. All three articles were published between 2018 and 2019 while he’s in government.

But SCOPUS can be unjustifiably exclusionary, so I looked him up on Google Scholar, a more expansive and laissez faire database of scholarly articles and books. He has exactly 10 articles and 39 citations there. Of the 10 articles, he is the first or sole author of 5 and a “tag-me-along” co-author of 5.
Sadly, at least 5 of his 10 articles are in dubious, pay-to-play, predatory journals that would destroy the academic career of any scholar in a serious country. Most of the articles were accepted and published in the same month that they were submitted! Since peer review typically takes months, the articles were clearly not peer-reviewed.

Evidence of a lack of peer review is evident in the fact that several of the articles are riddled with avoidable proofreading and grammatical errors. Plus, many of them, such as one that was basically an unimaginative 7-page rehash of publicly available facts about NAFDAC, are flat-out scholarly scams that a serious undergraduate won’t even be caught committing.

He published only two scholarly articles—in 2013 (from his PhD thesis) and in 2015—before he came to government, which explains why ATBU refused to promote him to senior lectureship. By 2014 when he wanted to be a Senior Lecturer, he had only one notable publication.

There is no serious university in the world that can legitimately promote a former Lecturer I (at ATBU) or an Assistant Professor (at the Islamic University of Madinah) overnight to the position of professor with only 10 substandard publications in predatory journals and 39 citations. The minimum number of publications required to be promoted to professorship in most Nigerian universities is 15. A professor should ideally have at least 100 citations.

Plus, Pantami didn’t spend up to a year as Lecturer I. Nigerian academics are required to spend at least 3 years in a rank. Three years as a Lecturer I, 3 years as a Senior Lecturer, and 3 years as a Reader would give you 9 years. That means he needs to spend at least 9 years in the university after his ministerial appointment— and publish a few more articles— to be qualified for promotion to professor. In Saudi Arabia, it would require at least 8 more years.

(Of course, if he was actually employed by FUTO that “promoted” him, his unmerited professorship wouldn’t have attracted any notice since there are several such examples of perversions of traditions all over Nigerian universities. It’s the absurdity of being promoted to a professor at and by a university he was never affiliated with while he’s a serving minister that made the fraud stick out like a sore thumb.)

Also note that Pantami’s PhD is in management, a social science discipline, not in computer science or cybersecurity. So, it’s doubly fraudulent that he has been “promoted” to the professorship of a discipline he didn’t study or publish in extensively.
His doctoral dissertation, titled “A theoretical and empirical investigation of the barriers to the adoption of state-of-the-art information systems by Nigerian indigenous oil companies,” which is freely available on the Internet, is basically a survey of employees of Nigerian oil companies on their perceptions of IT policies in their places of employment. It’s a social scientific study that any political science, sociology, or economics graduate can conduct.

Now that I have established that he can’t legitimately be a professor anywhere in the world on the basis of his scholarship and pedagogy, can he be appointed a professor on the strength of his industry experience? No! The only other job Pantami has ever done outside of government and his less than 10 years of university teaching is being the Imam of ATBU. He has never invented any cybersecurity patent and has never worked in a cybersecurity company.
The only discipline that can validly appoint him as a professor of practice is Islamic Studies. Say what you may about him, he is one of northern Nigeria’s most prodigious and consequential Islamic exegetes. His oeuvre in Islamic exegesis is unquestionably worthy of a professorial appointment in Islamic jurisprudence.

That’s the path of least resistance he should have taken since he desperately desires to be addressed as a professor.
In defense of Pantami’s professorial fraud, one Professor Tukur Sa’ad hashed over a litany of people who became professors without terminal degrees and without prior teaching experience, as if I didn’t already make that point and called it an example of what we call a “professor of practice” in American academe.
In my December 20, 2015 column titled “A Comparison of Everyday University Vocabularies in Nigeria, America, and Britain (II),” I gave an even more dramatic example than Sa’ad’s in the late Maya Angelou who was a lifetime endowed professor of American literature at Wake Forest University but who didn’t have a bachelor’s degree.

Wole Soyinka, Chinua Achebe, JP Clark, Ngugi wa Thiong’o and a host of other literary icons didn’t have—and didn’t need to have—a PhD to become professors. Apart from the fact that they didn’t climb the professorial mountain from the top (they started from lectureship), their path-breaking and prodigiously creative outputs are equivalent to—and in some cases exceed—a PhD.
In North American universities, it’s called “Research and Creative Activity” for a reason. Wole Soyinka, Achebe, JP Clark, etc. had vast and varied oeuvres in “creative activity” before they became professors. Plus, during their time, the possession of a PhD was not a requirement to move through the academic hierarchy.

It’s called an “honorary professor” in some UK universities, an “extraordinary professor” in South African universities, and a “professor-at-large” in others. It’s basically an honor given to people who’re already professors elsewhere, so you can’t become a courtesy professor at another university if you are not already one somewhere else.
Some people said Pantami’s “achievements” as a minister are worthy of a professorial appointment.

OK, so people who imagine themselves to be successful in whatever they do should now apply to FUTO for a Pantamized fraudfessorship to aggrandize their insecure egos?
Look, I’m calling out Pantami’s professorial fraud not despite my being a Muslim and his friend but because I’m a Muslim and his friend. My father, who was a Hafiz like him, would disown me if I ignored or gave comfort to fraud.