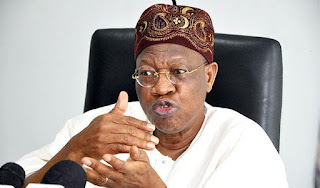 The Minister of Information and Culture, Alhaji Lai Mohammed, yesterday, reacted to the allegation that President Muhammadu Buhari, during a business conference in London on Wednesday, described Nigerian youths as lazy, insisting that the President was misquoted. He insisted rather that the welfare and development of Nigerian youths are among top priorities of the federal government.

The minister spoke while fielding questions from newsmen in Abeokuta, Ogun State, after attending the ongoing African Drum Festival.

He said: “Some people have just made it their full-time job these days to scrutinise and twist whatever the President says out of context.

“I wonder how a government that has employed 100,000 unemployed graduates and also feeds about 7.5 million people daily could be tagged anti-youth.Our social investment programme has continued to generate jobs and created opportunities for our teeming youths, while our empowerment programmes have been providing soft loans to over 400,000 youths. Millions of families and individuals have also continued to benefit from our Conditional Cash Transfer initiative.

“This is a government that is so concerned and passionate about youth development and it is not right for people to begin to quote Mr. President out of context, thereby inciting the youths against the government.

“Critics should judge us by our actions and not by their emotions.”

Mohammed said the festival, which started in 2016 as solely a Nigerian affair, is now drawing participants from African countries, adding: “I am sure that with the complexities and nature of those in attendance this year, the festival will soon become a global affair.”He described the drum as a connecting rod that binds the African region together, saying the festival is aimed, among others, at ensuring that the continent does not completely lose touch with its past, and consider ways of adding values to drum for preservation, in the light of infiltrations of other musical instruments from the western world.

“We have learnt from this festival that drum is not just for music, but there is something deeper and connecting about drum, as far as Africa is concerned.

“It is so central and significant to the lives of various communities in Africa, because it serves as an instrument used to herald different situations, like wars and festivities, and people can interpret it when it is beaten.

“What we are doing with this festival is to go behind and beyond the drum and see what exactly it means for Africa.

“As I look at the drums from Nigeria, Zimbabwe, Ghana and others, I see something connecting us by their shapes, build and other features.

“We will continue to spend time, energy, funds and other resources to explore the role and importance of drums, particularly in the African context.”