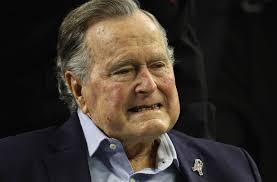 The Former president of the United States George H.W. Bush has been hospitalized in Houston, just one day after his wife of 73 years was laid to rest.

A Bush rep says he contracted an infection that spread to his blood. The 93-year-old former President has suffered a variety of health problems, including pneumonia back in January 2017. He also suffers from vascular parkinsonism … a rare syndrome that mimics Parkinson’s disease.

As for the latest health problem, doctors say their famous patient is responding to treatments and appears to be recovering.