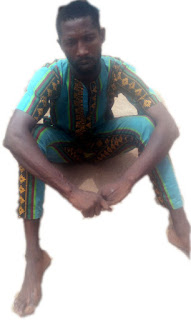 Detectives attached to the Lagos State Police Command have arrested a 50-year old man, Taiwo Oyelabi for allegedly having sex with his daughter and impregnating her. Oyelabi, however, stunned policemen when he vehemently insisted that his 21-year-old daughter seduced and later raped him.

He said that the girl was always demanding sex from him because she was possessed by an evil spirit. Oyelabi said: “One day, I was sitting in our apartment, when she came and suddenly grabbed and started kissing me and then she raped me. I stood up and beat her. I took her to a white garment church where I was told that she was possessed. I have had intercourse with her for about five times before I discovered she was three months pregnant.

This is the work of the devil because I don’t know what to do with the baby. “Her mother and I separated when she and her twin sister were just twoyears- old. My sister, who is in Abidjan, came to take her to live with her. It was at Abidjan she learnt a trade.” He said that after spending about two years in Abidjan, “my sister returned her to Nigeria. My sister said that my daughter didn’t know how to calculate money. Since then, we have been living together in my one room apartment.


The suspect further said: “It was when my daughter returned from Abidjan that her stepmother moved To avoid sleeping with her again, I took her to a woman, where she started learning how to make nylon. I was shocked when she came home after weeks, walked to where I was sleeping and started kissing me.

I had sex with her that very day. Whenever she started kissing me, I wouldn’t be able to resist her; that was why I had been having sex with her.” Oyelabi added: “Before I was arrested, I made attempts to kill myself twice. I couldn’t bear it anymore.

The incident started in November 2017..Since then, the suspect had been having inappropriate sexual liaison with his daughter. The result of this unholy alliance between father and daughter led to pregnancy.”