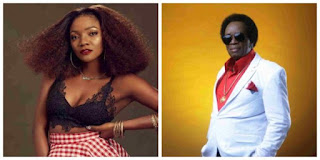 Professor Uwaifo’s recognition soared when his song ‘Joromi’ became a hit in 1969. However, he says the song has now become a victim of intellectual property theft as Simi failed to give credit to him when she released her own version in 2017.

Uwaifo made this known in an interview with SaharaReporters at the Annual General Meeting of Copyright Society of Nigeria COSON, in Lagos.


The former commissioner for arts and culture in Edo State described copyright and Intellectual property theft as a very serious issue in Nigeria, saying it must be dealt with urgently as it is reducing the creativity of the new generation of musicians.

According to him, the process of making music has now significantly changed from what it used to be in his time, as “more mediocres” are now in the game.

“Copyright is a very serious business and the contravention of copyright laws is more serious than you can imagine. Most people still believe that someone can just pick somebody’s work and use it for his own benefit.

You know one single track is equivalent to research journal and then a whole record is equivalent to a book publication, so people don’t understand it. It takes a lot of research to be able to do one piece of music.


The composition, the lyrics, the music, the score, the arrangement, the production and booking of the studio all cost money, and someone will just come and take the work and use it as his own or probably do an advert on it.”

Uwaifo recalled how he sued Pepsi for N500million for using one of his songs in one of its adverts without following the due process.


“Joromi’ is a franchise; the name never existed before. For example, if I use the trademark of one of these soft drinks, it is wrong. So Simi is in trouble.”