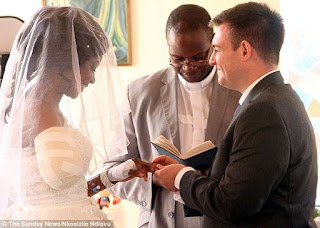 Zimbabwe game rangers have killed the crocodile which attacked newly-wed, Zanele Ndlovu-Fox, just five days to her wedding and battered her right arm.

This was confirmed via a statement released to the media. “We have since managed to track and kill the crocodile because since it tasted human blood, it was bound to be a problem,” said Tinashe Farawo, spokesperson for the Zimbabwe Parks and Wildlife Management Authority.

The killer crocodile viciously attacked Zanele Ndlovu five days before her wedding to British man, Jamie Fox, as they were canoeing an inflatable boat with other tourists on the Zambezi River above the Victoria Falls.

It is reported that the crocodile punctured their boat and then grabbed Ndlovu’s arm and repeatedly tried to drag her under the water.

She was eventually rescued by her husband and their canoe guides, but her right arm was so badly injured it had to be amputated above the elbow.

Ndlovu’s courage to go ahead with her wedding while still wrapped in bandages just days after the attack made headlines worldwide.