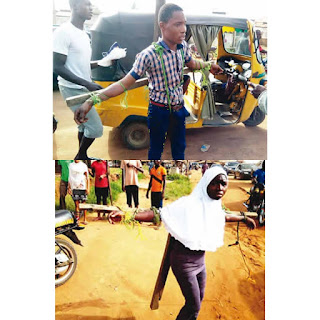 The Ogun State Police Command on Wednesday arrested the proprietor and principal of Metorite Standard School, Ayetoro, for allegedly tying up two pupils of the school to ‘crosses’ and flogging them with a horsewhip.
The proprietor, Afolayan Joseph, and the yet-to-be-identified principal were said to have tied the pupils for allegedly coming late to school.


A policeman, identified only as Livinus, who witnessed the incident and cautioned the men, was beaten up.Joined by other residents, the policeman was said to have succeeded in getting the suspects arrested.Punch learnt that the suspects were taken to the Itele Police Station.

The policeman, who is attached to the Inspector-General of Police Monitoring Unit, told our correspondent that the pupils were tied to the wooden crosses in the open.

He said, “I was going to work this morning (Wednesday) when I saw some cars parked by the roadside. I discovered that it was because of some pupils that were tied to crosses. When I saw it, I parked and went to meet the proprietor of the school. I introduced myself as a policeman and told him to untie the pupils. He refused, saying there was nothing anybody could tell him that would make him to release them.

“When I tried to untie the pupils, the proprietor and his teachers beat me up. Before I returned from picking handcuffs from my car, they had grabbed a friend who was with me, Omaje iremi, and beaten him up with a horsewhip
“I entered the school – with the help of some neighbours who gathered around – to arrest him, but he refused to follow me. I then called the Divisional Police Officer of the Itele Police Station and he sent some policemen to the school, who took everybody to the station.”

The DPO of Itele Police Station, who declined to give his name, said the proprietor did not like the policeman’s attempt to correct him.
The state Police Public Relations Officer, ASP Abimbola Oyeyemi, confirmed the arrests of the two men, as well as a teacher in the school.