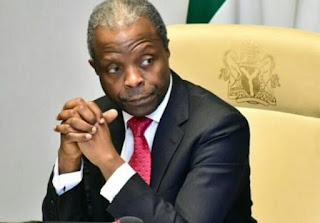 Vice-President Yemi Osinbajo on Tuesday night said he would rather vacate his office as the nation’s Number Two man than compromise his Christian faith.
Osinbajo stated this while responding to posers raised by some Christian leaders at the stakeholders’ meeting held at the new Banquet Hall of the Benue State Government House, Makurdi.

One of the speakers, the Catholic Bishop of Gboko, His Lordship, Williams Avenya, had reminded Osinbajo of the then-presidential candidate of the All Progressives Congress, Muhammadu Buhari’s campaign promises that he would not Islamise the country and would protect the interest of all Nigerians including citizens of minority ethnic groups if voted into power.


Quoting Buhari, the bishop said, “My deputy is a Christian and there is no way I will Islamise Nigeria with many Christians in my team.” Avenya noted that the killing of Christians and members of the minority ethnic group particularly in Benue State had proved that the Federal Government under Buhari was not living up to these promises.

Facing Osinbajo, the bishop said, “The point I’m trying to make is that a day is going to come when you, as the Vice-President, will bear the brunt of that problem of injustices in our land, especially those perpetrated on smaller ethnic groups that have no one to fight for them. “So, as a Christian person, exonerate yourself from this situation,” the bishop advised the VP.

Responding, the vice-president said, “My Lord Bishop, you said you are not a politician, I am also not a politician. As a matter of fact, I’m also a priest and I’m a Christian, a born again Christian. Because I’m a born again Christian, my destiny is not determined by any man but by God who I serve.
“Let me assure you that under no circumstances, none whatsoever, will I give up my faith or refuse to stand up for my faith. “You can take that to the bank. Even the position that I currently occupy, I did not ask for it and I’m prepared to leave it at a short notice.