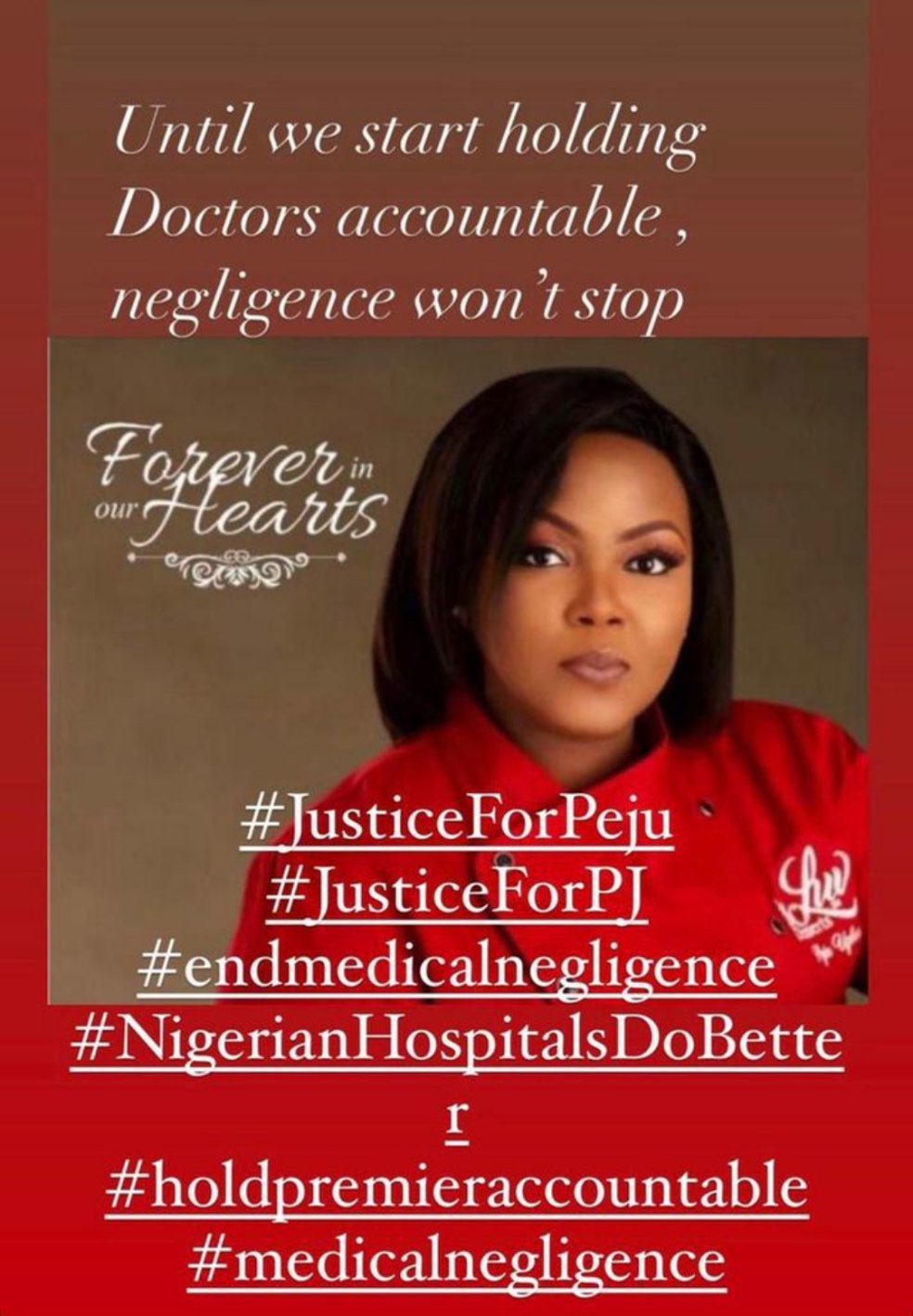 Trouble is brewing between Premier Specialist Medical Centre, Victoria Island, and the Family of award-winning Lagos-based founder and CEO of I Luv Desserts, Mrs Peju Ugboma, on what the family has termed gross negligence on the part of the Hospital, which led to her untimely death.

An independent autopsy carried out by pathologists at LASUTH with credible observers and Premier hospital in attendance revealed that Peju suffered internal bleeding. It was discovered that she had about 2 Litres of blood in her abdomen and pelvic area. The family revealed that Peju was admitted into Premier Specialist Hospital on Thursday, April 22nd, 2021, as directed by the Hospital, to carry out an elective surgery for a fibroid issue.

She walked into the Hospital by herself unaided as it was by no means an emergency surgical procedure. She had concluded all the necessary tests required before the surgery, including ECG, PCV, and Covid -19 tests. Her vitals were okay and she had no preexisting conditions before surgery. All payments were made for the preliminary tests. The hospital demanded their account be funded to the tune of N1.5 million and the family deposited N1 million immediately.

The surgery was carried out on the morning of Friday 23rd April 2021, by Drs. Akinsiku, lwuh, Asemota, Renner, and some other medical personnel in Premier Specialist Hospital, Victoria Island.
Peju’s husband saw her after the surgery on Friday, and she complained about severe abdominal pain and discomfort, which he felt was not unusual for someone who had just come out of surgery. However, her blood pressure had dropped to as low as the range of 50/30. The doctors then gave her a blood transfusion because she had lost a lot of blood during the surgery.

Early on Saturday morning, she told her husband that the veins on her hands had collapsed and the Hospital wanted to give her fluids on a vein close to her neck and collarbone. She also mentioned that the doctors said her kidneys were not functioning optimally, and a Consultant Nephrologist had been called in to come in that Saturday morning. This was a shock to them both as all tests before surgery were fine. The Consultant eventually came in as scheduled but dismissed both their concerns.

By Saturday evening, she had been given 3 pints of blood. It’s worthy to note that none of the gynaecologists who performed the surgery attended to her throughout that Saturday despite all her pain and concerns expressed by her husband. That same Saturday evening, her blood pressure dipped further. Dr Renner told her husband that they would need to move her to the ICU. He was asked to pay an additional Na.5 million before she could be moved to the ICU and he paid the money without delay. Peju was admitted into the ICU immediately after payment.

Dr Renner then told her husband that he needed an additional 3 pints of freshly donated B+ blood, as Premier Specialist hospital did not have any in the Hospital’s blood banks. This left him with no choice but to go on a blood donation drive from friends and family. Several donors were screened and they donated a total of 9
pints of blood that night. As this was going on, Peju kept complaining of severe pains, and her eyes had turned yellowish. At about midnight that Saturday, she was sedated intravenously.

By 6.30 am on Sunday, her husband was surprised to find out that his wife had been placed on a respirator. Dr Renner told him that her condition had deteriorated through the night. Her husband saw that she looked pale, and her eyes had been taped as if to keep them closed, but she was still breathing and the monitors were still reading. Peju’s husband had been in touch with a family friend who is a UK based consultant gynaecologist. The consultant raised alarm and insisted on speaking with the doctors at Premier hospital. He spoke with Drs. Asemota, Iwuh and the medical
director Dr Oshinowo. He stated expressly that he thought that she had severe internal bleeding and needed to be moved back to the operating theatre for the bleeding to be arrested immediately. The premier team however ignored his
advice.

Premier decided to move Peju to a hospital where she could have a CT Scan and possible dialysis. By 10 am on Sunday, her husband was informed that his wife would be moved to Evercare Hospital, Lekki Phase 1. However, it took 3 hours before she was moved to Evercare. Immediately she arrived there she was met by their medical team and taken to the ICU. Her husband was asked to pay another Na million at Evercare, and he made the payment immediately.

The head of the ICU detected that Peju did not have a pulse and emergency CPR commenced immediately. This failed and she was pronounced dead by 2.20 pm on Sunday. Premier Specialist Hospital offered to do an autopsy, however, the family insisted
on an independent autopsy. The independent pathologist requested Peju’s full medical report before the autopsy as is normal practice but Premier Specialist Hospital management was playing games to stall releasing it. It took a visit by the family of the deceased to Premier Hospital who engaged the doctors and management in a shouting match and nearly resulted in a physical
confrontation before the medical reports were released.
The deceased’s family allege that the medical reports sent to the independent pathologist may have been tampered with or altered.

It is clear that Peju bled internally from Friday after the surgery till Sunday when she died, and it is shocking to note that Premier hospital was negligent enough not to pick this up and save her life. Peju’s tragic and unfortunate death has left behind two heartbroken little girls, a grieving husband and an aged mother and loved ones.