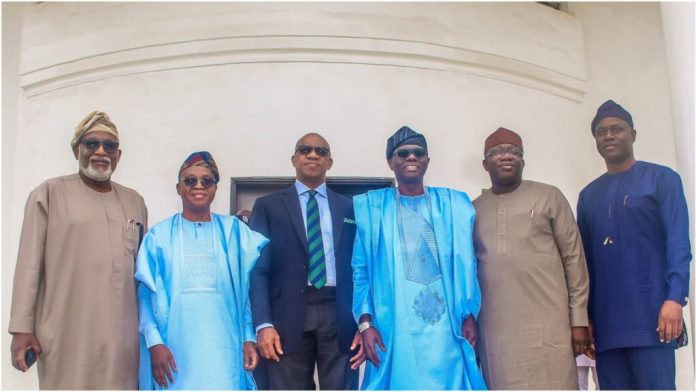 The South-west Governors Forum has proposed the conversion of the six geopolitical zones into federating units.

The governors made the proposal in a document presented to members of the national assembly from the south-west, as part of the review of the 1999 constitution, THISDAY reports.

The document dated July 5, 2021, is titled ‘Proposals for the Review of the Constitution of the Federal Republic of Nigeria 1999 (As Amended): Presentation by South-West Governors’ Forum’.

The governors proposed an amendment to section 3(1) and (3) of the constitution.

Section 3(1) of the 1999 constitutions states that there shall be 36 states in Nigeria but the governors proposed that the section be amended as a federation consisting of six geopolitical zones constituted from the states.

At independence in 1960, Nigeria had three regions — northern, western, and eastern.

However, states were created out of the regions and the six geopolitical zones were delineated during the regime of Sani Abacha, late head of state, in 1993.

“Section 3(6) be amended to provide for several local governments or such autonomous administrative units to be created by the respective federating units or states, the criteria of which shall include population, taxable capacity, ethnoreligious or other cultural and social affinities.”

“Section 7 of the constitution be amended to include an additional (sub)section prohibiting the dissolution of elected local government councils.

“This will be in compliance with the Supreme Court decisions in ALGON v. Oyo State Government; AG Plateau State & Others v. Goyol & Others; Governor, Ekiti State v. Olubunmo & Others.”

The governors also proposed that sections 8 (5) and (6) be removed so that local government creation will be the exclusive duty of state governors.

“However, Section 8(5) and (6) should be expunged to make local government creation the exclusive duty of the state government.”

The governors also sought the removal of section 29(4)(b), which confers adulthood status on a married under-18 woman.

“Section 29(4)(a) and (b) contradict each other. While (a) says ‘full age means the age of 18 years and above’, (b) says ‘any woman who is married shall be deemed to be full of age’. This reinforces child marriage which negates the Convention on the Rights of the Child 1989 and the Child’s Rights Act 2003, which outlaws child marriage.”

The governors also want the states to be in charge of mineral resources within their territories.