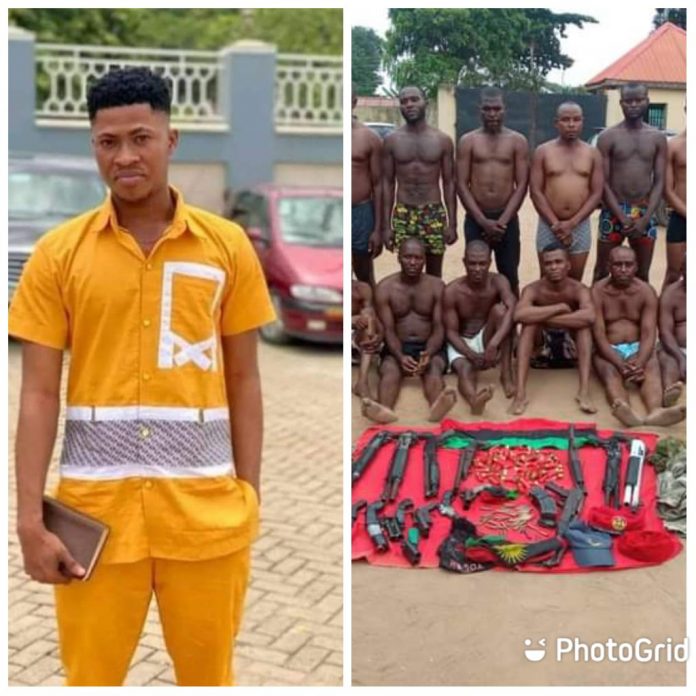 A missing boy identified as Elvis Okafor has been paraded by the Imo State Police Command as unknown gunmen and tagged as one of the people who attacked Omuma and Njaba Police Station.

It was gathered that Elvis was reported missing when he was sent to buy medicine for his sick mother in Orlu but was apprehended by the Police.

A press release by the Police Public Relations Officer, Micheal Abbatam on Monday revealed that the arrest of a 15-year-old bandit identified as Emmanuel Nnaji led to the arrest of others at a hotel where the gunmen used as a hideout.

Sequel to the recent attack on Omuma Police station and Njaba Police Station respectively, where the bandits were swiftly repelled by the ever-alert tactical teams of Imo State Police Command and the unfortunate loss of a Divisional Police Officer and the arrest of one of the bandits, Emmanuel Nnaji ‘M’ age 15 years, a native of Awala in Ideato South LGA of Imo State, with bullet wounds and brought to the station. On interrogation by the command’s tactical teams, the suspect gave a vivid description of a Hotel located in Orlu as were they, the bandits stayed, planned before they executed their dastardly act on the police stations. He further stated that the owner of the Hotel has been accommodating and assisting them financially. He then volunteered and led security forces to the location of the hotel. On arrival, the hotel and house were cordoned and searched the following exhibits were recovered from the arrested twenty-six suspects including seven females in the hotel they incudes;
(1) ONE AK47 RIFLE WITH TWO MAGAZINES LOADED WITH 55 ROUNDS OF LIVE AMMUNITION.
(2) FIVE PUMP-ACTION GUNS
(3) TWO DOUBLE BARREL CUT TO SIZE GUNS
(4) FOUR DOUBLE BARREL LOCALLY-MADE PISTOL
(5) THREE SINGLE BARREL LOCALLY MADE PISTOLS
(6) EIGHT SIX LIVE CARTRIDGES
(7) CHARMS
(8) TWO BAGS OF WEEDS SUSPECTED TO BE INDIAN HEMP
(9) BIAFRAN FLAG AND BERET
(10) ESN CAP
(11) FOUR PAIRS OF ARMY CAMOUFLAGE UNIFORMS AND A CAMOUFLAGE BAG
(12) A SIGNBOARD WITH BIAFRA INSIGNIA. It is on good record that, it was in the same hotel that the head of a young man was severed and placed on the road close to the hotel premises.
Presently, the investigation is ongoing and the suspects are undergoing interrogation. In like manner, it would be recalled that, in the same Orlu, some months ago during the peak of IPOB/ ESN attacks and killing of Police officers including innocent citizens and burning of Police stations in the state. That, the command’s tactical teams and Special forces, after a diligent gathering of technical intelligence, arrested one Boniface Okeke ‘M’ age 57 years from Obor Autonomous Community in Orlu LGA of Imo State in connection with terrorism and attacks on security agencies and private individuals where several Police stations were burnt down and police officers killed in numbers. On interrogation, he confessed to being a facilitator and financer of IPOB/ ESN Operation in the state to the tune of ten million Naira (#10,000,000) while he was outside the country. He assisted the police in the arrest of some of their members and decimation of their Camps in the state. Meanwhile, the Commissioner of Police, Imo State Command, CP Abutu Yaro, FDC, while commending the good people of Orlu and Imo State in general, pleaded for calm as security agencies are doing everything humanly possible to sustain the already improved peace in the state.