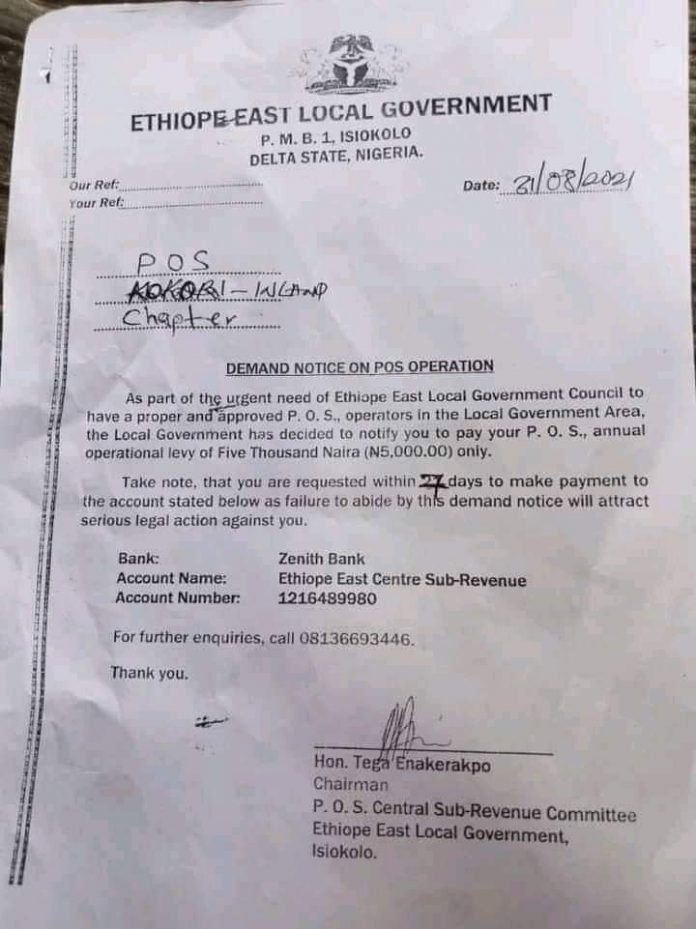 Point Of Sale (POS) operators have been mandated to pay five thousand naira, N5000, as an annual operational levy by the Ethiope East Local Government Area of Delta State.

This was made known in a notice signed by the Chairman of the POS Central SubRevenue Committee of the local government, Hon. Tega Enakerakpo, made available to POS operators on the 31st of August, 2021.

The notice clearly stated that the operators were given 7 days to make the payment and warned that failure to do that will attract serious legal action.

The letter reads, “As part of the urgent need of Ethiope East Local Government Council to have proper and approved POS operators in the LGA, the Local Government has decided to notify you to pay your POS annual operational levy of five thousand naira (N5,000.00) only.

“Take note, that you are requested within 7 days to make payment to the account stated below as failure to abide by this demand notice will attract serious legal action against you.”

Reacting to the notice, Warri-based blogger, Warri Aproko Special, on his social media handle urged the Chairman of Ethiope East LGA, Ofobrukueta Victor, not to suffocate jobless and common people with tax.

He noted that most of the operators are doing the business with loans from banks and cooperative society.

“Five thousand naira (N5,000) tax as operational levy on POS operators is uncalled for. Most of them are doing the business with loans from banks and cooperative society.

“Design programmes that will take jobless people from the street in your local government area.

“Stop suffocating jobless and common people with your tax.  I’m in PDP but will never support this rubbish.” He added.