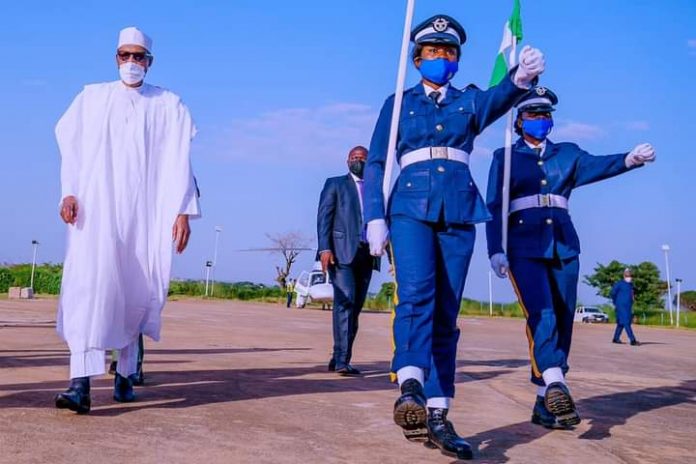 President Muhammadu Buhari says the Federal Government will do everything within the ambit of the law to protect citizens from the onslaught of criminals, which include insurgency, banditry, kidnapping and politically motivated killings.

Speaking on Saturday in Kaduna at Passing Out Parade for Cadets of 68 Regular Course (Army, Navy and Airforce), the President assured that more equipment had been received from some friendly nations to improve security operations.

He said said the government remains focused on its priority of improving security, bolstering the economy and fighting corruption.

“As you are all aware, our beloved nation Nigeria is facing many security challenges at this period. We continue to face security threats and violent crimes such as insurgency, banditry, kidnapping and politically motivated killings which threaten our national integration.

“I assure you that this administration will continue to do everything within the ambit of the law to eliminate all forms of violent crimes that are creating fear and anxiety among the citizenry.

“It is pertinent to state in this regard that, we have received new equipment in our fight against any form of insecurity from our friendly countries.

“These assets will be deployed to accelerate the fight against insecurity in all parts of the country,’’ the President said.

President Buhari noted that security had assumed priority in governance and public policy in international scheme of affairs.

“It is against this backdrop that we introduced a new Landing Ship Tank early this year to replace the first set of naval ship tanks which were decommissioned by the Nigerian Navy.

“The introduction of the Landing Ship Tank is expected to bolster the Navy’s Sealift capability and promote our global maritime commerce, peace and safety within the Gulf of Guinea and our maritime neighbourhood,’’ he added.

The President said the administration was poised to eliminate the incentives for corruption by addressing some of the remote causes as part of a long-term strategy for a more effective and sustained war on the practice.

He said improvement of livelihoods of citizens had been going on in partnership with relevant organized private sector.

According to him, some of the interventions by government are:

“A smart law enforcement; provision of improved access to education that prepares our youths for global competitiveness; provision of quality health services for improved life expectancy and decent and affordable housing, among others.

“It is the conviction of this administration that ineffective policies for social provisioning must be redressed in our efforts to tackle the fundamental causes of corruption in our society. This is how best to give vent to the much-cherished values of fairness, equity and justice to the people of this nation.

“I must also emphasize here that, for us to achieve a peaceful, prosperous and democratic country that will attract foreign investors we must be law abiding, committed and promoters of peaceful co-existence. This is a collective responsibility which will definitely yield the Nigeria of our dreams,’’ the President noted.

President Buhari commended the Commandant of the NDA, Maj. Gen. Ibrahim Manu Yusuf, for the infrastructural upgrade in the military institution, and the colourful parade by the cadets of 68 regular course.

“It gladdens my heart to see the level of infrastructural development in the Academy. It is a clear testament to the vision, dedication and excellence in the best tradition of NDA.

“Nigerians acknowledge that the Academy has consistently justified its existence over the years by turning out well trained and disciplined officers for the Armed Forces of Nigeria as well as militaries of allied nations.

“The NDA has over the years trained and graduated military and paramilitary personnel as well as interested civilians seeking postgraduate education. It is therefore not surprising that the Academy has earned a reputation as an outstanding military Academy in Africa. Let me therefore extend my sincere felicitation to the Commandant, staff and gentlemen cadets of the Academy on this memorable occasion,’’ he added.

The President, who was the Reviewing Officer, told Graduating Officer Cadets, that the world they were entering was very different from that which confronted many of their predecessors.

“The contemporary security environment has been described as violent, uncertain, complex and ambiguous.

“You can therefore expect that the missions that you will be tasked to undertake will be similarly complex. Beyond these significant rationales, I am convinced that we have a real stake, and an abiding self-interest, in making sure our children and our grandchildren grow up in a world where school children are not kidnapped and where individuals are not slaughtered because of their tribe, faith or political beliefs.

“I believe that a world of greater freedom and tolerance is not only a moral imperative, but also a fundamental requirement for our collective safety. I am however delighted with the training you have undergone as you have been well-prepared to meet the challenges you will face in the field.

“You have all been carefully nurtured by competent instructors and staff during your time in this Academy. In the course of your training, you have been subjected to gruelling regimes of exercises, simulations and bespoke programmes that have prepared you for the tasks ahead. On your behalf, I offer heartfelt thanks to everyone here at NDA for the skills, competences and confidence they have embedded in all of you,’’ the President said.

President Buhari appreciated families and friends of Cadets for standing by the impressive young men and women who were passing out, urging continued love for them in the course of their career and beyond.

“Family is the backbone of our Armed Forces; it is the heart of everything we do and your support for them has not only allowed them to succeed today, but will help them to flourish and grow in the coming years.

“Officer Cadets, my hope is that each of you has a rewarding career, full of opportunities and challenges, which will sometimes stretch you to your limits.

“Though we continue to live in an ever changing, chaotic, unpredictable world, your training here will stand you in good stead to meet whatever lies ahead and will help you navigate through good times and hard times, happy times and sad times, so remember to draw on the valuable lessons you have learned here,’’ he said.

The President also presented awards to cadets that distinguished themselves in academics and various military trainings, and commissioned all the officers.

In his remarks, the Deputy Commandant of NDA, Air Vice Marshal A.I. Ahmodu, thanked the President for “unwavering commitment and support for the NDA’’ over many years.