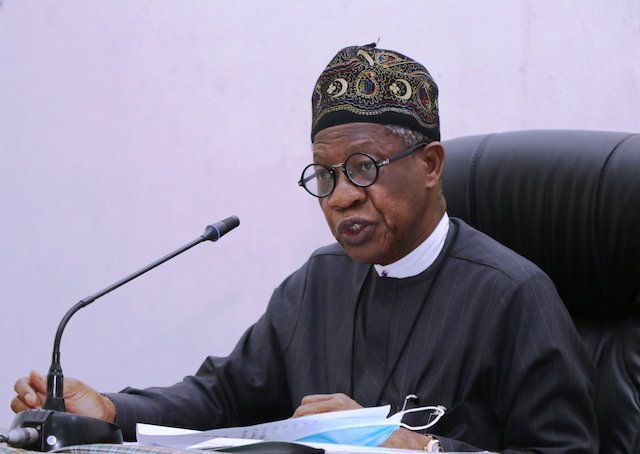 At a press conference in Abuja on Wednesday, the Minister of Information and Culture, Alhaji Lai Mohammed described the event at Lekki toll gate as a ‘phantom massacre’.

Recall that on October 20th 2020, many Nigerian youths were allegedly killed, injured while protesting against police brutality, extortion, extrajudicial killing and harassment at Lekki toll gate, Mushin area in Lagos State and Oyigbo in Rivers State.

Though the latter has been underreported, the former has been discussed by intellects and the Nigerian soldiers have repeatedly denied shooting at protesters but claimed they shot into the air.

Alhaji Lai reiterated that it was a massacre without bloodshed and challenged that for one year, there has been no claim or charges by families of victims.

“Today marks the first anniversary of the phantom massacre at Lekki Toll Gate in Lagos, which was the culmination of an otherwise peaceful protest that was later hijacked by hoodlums,” the minister said.

“At earlier press conferences, I had called the reported massacre at the toll gate the first massacre in the world without blood or bodies.

The minister said the military did not shoot at protesters, and that the only shooting “was in the social media, hence there were neither bodies nor blood”.

“The federal government remains proud of the security agencies for acting professionally and showing utmost restraint all through the EndSARS protest and the ensuing violence, an action that saved lives and properties,” he said.

“The six soldiers and 37 policemen who died during the EndSARS protests are human beings with families, even though the Human Rights Organizations and CNN simply ignored their deaths, choosing instead to trumpet a phantom massacre.”