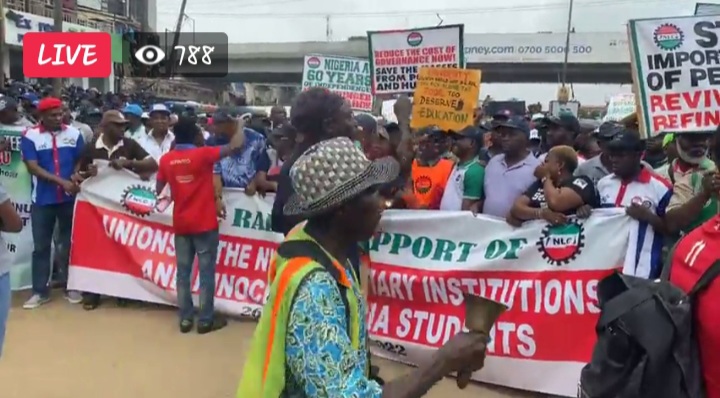 The Nigeria Labour Congress has kicked off its protest in Lagos State over the prolonged strike of the Academic Staff Union of Universities, ASUU.

The management of ASUU announced the commencement of its industrial action in February 2022 over the poor state of Nigeria Universities and also their salaries.

Announcing the protest in a statement, the NLC Chairman Ayubba Wabba called on all workers in the country to join the protest to initiate action from the Federal Government so students can return to school.

Addressing the media at Tayo Aderinokun auditorium at the University of Lagos (UNILAG), Akoka, in February, the union’s president, Emmanuel Osodeke, a professor, listed, as reasons for the strike, the government’s failure to implement the Memorandum of Understanding (MoU) and Memorandum of Action (MoA) signed between the union and the government; the government’s poor commitment to the payment of academic earned allowance (EAA); the continued use of the Integrated Personnel Payroll Information System and refusal to adopt the Universities Transparency and Accountability Solution (UTAS), and proliferation of the universities in the country.

Meanwhile, President Muhammadu Buhari has given two weeks to the Minister of Education Adamu Adamu to find a solution to the lingering strike.

The National Union of Electricity Workers and other workers has announced their willingness to join the action.