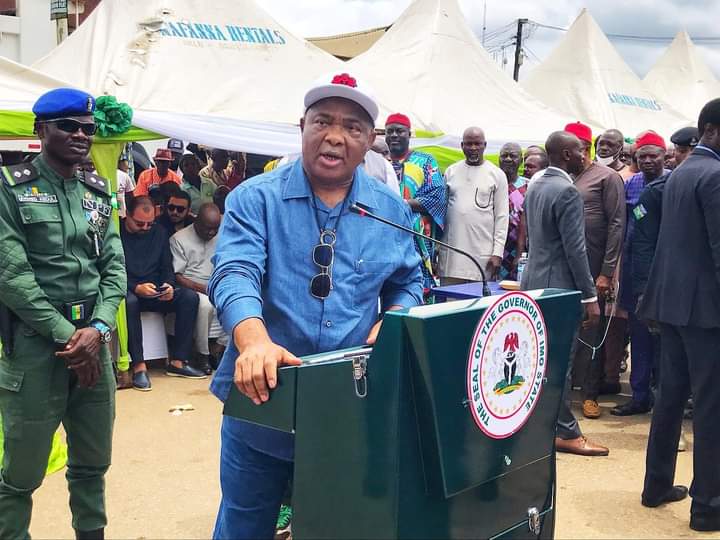 Governor Hope Uzodimma of Imo State has declared that there is no room for wastage in Imo State administration being spearheaded by him, as all resources will be managed prudently towards solving the pressing needs of the Imo people and providing critical infrastructures.

Uzodimma made this assertion while flagging off the construction of two federal roads in the state; Orlu-Akokwa-Uga and Owerri-Mbaise-Umuahia Roads, Tuesday.

He described the Orlu-Akokwa-Uga Road as one of the most strategic economic stimulation roads but was abandoned by successive administrations.
He solicited the cooperation of people of the area for the contractor handling the project.

Speaking while flagging off the Owerri-Mbaise-Umuahia Road, the Governor also described it as a very important road that will stimulate the economy of the state.

“It is going to be a very expensive project, but we have a cash management plan and a segmented funding system that will make it easy to gradually complete this road”.

He recalled that 18 months back, he flagged off the construction of Owerri-Orlu and Owerri-Okigwe Roads which some doubting Thomas did not give the government any chance, but have been proved wrong by the speedy and efficient manner the projects were being completed.

Earlier in his speech, the state Commissioner for Works, Ralph Nwosu recalled that the government team was in Orlu and Okigwe 18 months back to flag off the construction of Owerri-Orlu Road, as well as, Owerri-Okigwe Road which people took as a joke, but people are now happy over completion of the projects.

He said the inconveniences people suffer trying to traverse; Orlu, Uruala, Mgbee, Akokwa to Uga in Anambra state, was indescribable, adding, “But a Daniel has come to judgement. That is why we decided to choose one of the best contractors to handle the project. We decided to allow the contractor (Craneburg) that did something commendable in Owerri-Orlu and Owerri-Okigwe Roads to also handle these new ones.

In his remarks, representative of the contracting firm, Craneburg Construction Company, Mr Gilbert applauded Governor Hope Uzodimma for his commitment to the projects, his ability to conceptualize and deliver on the projects already executed.

He promised that the current contract given to the company will be completed in record time, with the quality they used in constructing the ones they have already executed in the state, appreciating the governor for the trust reposed in them.